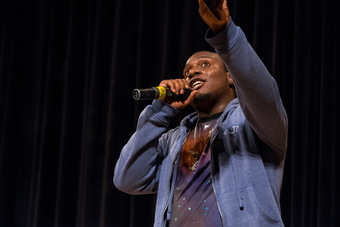 REAL, an actor from TONYC's Brooklyn Justice Corps Troupe at CASES, talks about the impact of performing in the Legislative Theatre Festival. This interview is part of a series conducted by Lance Richardson.

My name is Real, and I got involved with Theatre of the Oppressed NYC through the Brooklyn Justice Corps. I wanted to give back to my community. I wanted to be a voice for the people there, like a youth advocate. I already make music, but I saw this as an opportunity to do something more.

There are a lot of issues we face. Most people in New York are so unaware of this, and they’re going to remain ignorant until somebody steps up and speaks up. And who better to speak up than the people who live in these poverty-stricken areas, who actually face those issues everyday? I’m one of those people. I’ve had problems with the law. I’ve experienced racial profiling. I’ve seen the injustices we face.

For the Legislative Theatre Festival in June, my troupe called our play Criminal Injustice. The play was about a young, regular kid, living his life, who comes from a party with his best friend. He’s sober, not under the influence of any drugs, just looking for his car. But at that particular moment, a robbery has been called in, and the police target this young kid as a suspect because he fits the description of “black male.” The play was about how this kid and his friend was let down by the system, in all aspects –– by not read their Miranda rights, by being stopped-and-frisked. The police in the play just wanted to make themselves look good professionally.

On the night of the festival, when we performed before an audience, everyone in the troupe was ecstatic. I’m not shy –– I got that bug out of me a long time ago! But some of the actors were a little shy, and unaccustomed to being in front of people; and they were happy with how it went. They felt good on stage.

But the best part was that we weren’t just doing this in vain. We were doing this to get laws changed that are bothering us. We had a chance to get with politicians like Jimmy Van Bramer, and let them know exactly how we feel. Opportunities like that? It’s glorious.

The audience voted on ideas on how to make the situations in the play better. And then, after the festival, these politicians are obliged to attempt to make a change. But whether the change happens or not, I just feel good being a part of something like this. Everything else we’re doing at the moment –– rioting, fighting, all that stuff –– I understand it, but it’s not going to help anything, and maybe it’ll just make things worse. Here were have a positive way to get people involved.

It’s like, instead of being hateful to people, why don’t you just show them? Why don’t you give them an opportunity to see what you’re dealing with? I really like, in Theatre of the Oppressed, that the audience can get up on stage and take the opportunity to act out the problems the main character is facing. Because maybe it’s the closest thing those audience members have ever come to something like police brutality. And maybe it will be enough for them to feel, like: Wow, this is not even real, but if it feels like this on stage I can imagine what it must feel like in the neighborhood. That’s where change starts, you know?