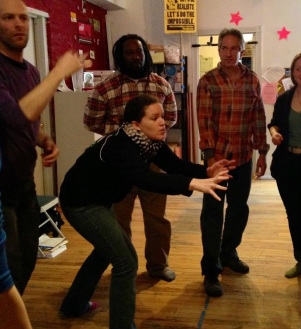 “To learn is to construct, to reconstruct, to observe with a view to changing—none of which can be done without being open to risk, to the adventure of the spirit.” - Paulo Freire, Pedagogy of Freedom

by Becca Lynch, TONYC Joker and Founding Member. This entry is part of a series in preparation for our 2014 Legislative Theatre Festival.

Some of the most exciting moments of my life have been the result of taking a risk or facing a fear - going to that audition, starting that conversation. Most fear is rational in the context of a story you’ve been told: if you approach a stranger, you might be robbed or kidnapped. If you jump off a cliff, you might hit your head on the rocks. These voices become “Cops in the Head” (see Augusto Boal’s Rainbow of Desire), policing your behavior and sometimes keeping you safe, but also sometimes leaving you incapable of taking the action you need to take.

Last week I co-facilitated a Cops in the Head workshop where participants embodied and gave voice to some of their own internal Cops based on their own experiences.The story that the group chose to work on that felt the riskiest to me -  related to an issue that can be fraught - was one that elicited a meaningful transformation in the scene from the start of the process to the finish. This one participant’s story activated the community in the room towards talking about how to change the larger social issue. As a joker, I’m learning that the ideal rehearsal space is not necessarily one of perceived safety, but one where real risk-taking can happen.

When TONYC decided to experiment with a new 10x10 model of crowd-funding in order to create our next Legislative Theatre festival, we encountered the same fears we do every time we ask people for money: Are our friends going to become tired of us asking? Today, 9 days into our 10 day campaign, we’re determined to reach our goal of $10,000, and are hoping this adventure is a risk worth taking. Check it out here!