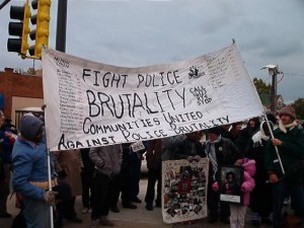 By Travis Stevens. This entry is part of a series in preparation for our 2014 Legislative Theatre Festival.

Theatre of the Oppressed NYC is hosting a legislative theatre festival to bring awareness to problems like police brutality and other social issues. I started doing research into organizations outside of New York that are fighting for social reform, and  I stumbled upon Communities United Against Police Brutality (CUAPB), a local organization based in St. Paul/Minneapolis, Minnesota. CUAPB does a multitude of things to help the public from the evils of police brutality. They offer a 24-hour crisis line so the people can report instances of abuse; they also help the people secure evidence whenever a case happens to arise, and they follow up with legal, medical, and psychological referrals as needed, just to name a few. I was lucky enough for CUAPB to take time out of their busy schedule to answer a few interview questions I had for them. The results follow:

1.) What do you feel like the root of the problem is?
There are several.  Municipalities and police departments insulate bad officers from accountability to avoid legal and financial liability for the officers' bad acts.  In addition, aggressive policing serves the interests of the elites in the community.  Racism and classism are major factors.

2.) Have you seen any changes since you’ve started your organization?
It is hard to measure a negative but we believe cops here are more cautious about using lethal force against people because of the protracted campaigns we mount when one of these incidents occurs.  There is also a much greater awareness that police brutality occurs and is a problem.  We have secured some particular and concrete victories including winning a class action lawsuit in 2006 that forced the cops to put cameras in their squad cars and securing the right to access and publish complaints filed against police officers.

3.) Do you feel like the government is doing enough for the cause?
Not at all.  In fact, they are the problem not the solution.  Municipalities cover for police misconduct to reduce their liability and to avoid angering the police union, since politicians think they need the union's endorsement for re-election.  They do this by both failing to hold police accountable in a meaningful way and by engaging in aggressive prosecutions of people who have been brutalized by police (often on phony charges) because under SCOTUS decision Heck vs. Humphrey if a person goes down on criminal charges in an incident, they lose their right to sue.  As to the Feds, they have done a few things in very egregious circumstances but nowhere near what needs to be done.  The FBI was tasked by congress with tracking the numbers and nature of police brutality incidents but has never done so.

4.) What kind of laws would you like to see implemented?
The issue is accountability.  As long as police departments insulate officers from the consequences of their conduct, nothing will change.  Our organization is addressing this.  We are pushing for a requirement that Minneapolis police officers carry individual professional liability insurance as a condition of employment.  Just as bad drivers pay more for car insurance, problem police officers would see their premiums increase and some would eventually become uninsurable.  This would create consequences for police misconduct and give the community a way to eventually get rid of the worst police officers. A ton of groups are watching this effort around the country and when we are successful here, I predict this will spread like wildfire to lots of other areas.

5.) What are your future plans for inciting change?
See above.  Our organization is on a full-blown campaign to get a charter amendment on the ballot (to change our city's charter--in essence our city's constitution) to require cops to carry their own professional liability insurance as a condition of employment.  This requires gathering over 10,000 signatures, so is a substantial effort.

We are pushing very hard for the local accountability mechanisms--as deliberately toothless as they are--to actually be effective and have sued some of them to force them to do their jobs. We continue our ongoing work of providing advocacy for people dealing with the effects of police brutality, engaging in political actions to expose incidents and change the policies and conditions that allow them to occur, to educate the community about their rights and ways to avoid and address police brutality, and to build a movement that provides a structure for the community to effectively take on police brutality, misconduct and abuse of authority and bring it to an end.
***
It’s unfortunate that these issues are happening globally, but it’s amazing to know that there are other organizations that are fighting for change. I feel like all of these internal problems with the police and our government are holding us back as a nation, and am glad whenever I see or hear about organizations like CUAPB. Hopefully this and other similar organizations reach success in their goals so we can finally move forward as a better country.