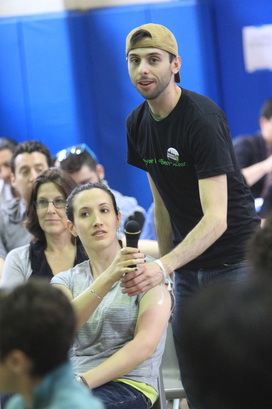 Today’s the day…we’ve made it to the opening of Can't Get it Right: Theatre of the Oppressed NYC's second Annual Legislative Theatre Festival!

Starting tonight and throughout the course of this weekend, troupes from Housing Works, the Ali Forney Center, and the Queens Justice Corps will share original plays based on their own experiences of oppression within the criminal justice system.  But just wait, that’s not all – in the audience, community members, city legislators, YOU – will collaborate and brainstorm to draft new laws that will challenge the issues witnessed on stage and inspire real change at a policy level. In addition, there will be a Criminal Justice Info Fair, a TO workshop of games and exercises and a guest performance of The Castle by The Fortune Society…wow.

Right about now, you might be wondering how all of this will happen within the time frame of one weekend! If you’ve kept up with our spring blog series, then you’ve learned about the amazing actors, partner organizations, staff members and legislators that have worked tirelessly to help kick this festival off the ground. But I want to fill you in on a community of dedicated, socially minded folks that will be contributing their time and efforts with us throughout the next three days – our amazing Volunteers!

At the heart of every TONYC event lies the core theme of taking action. The volunteers that participated with us at last year’s festival, as well as those joining us this year, are no strangers to this idea. Much like the actors and staff members that dedicate a good ten weeks or more to building a forum play, they too are drawn to this work by a strong desire to investigate and transform community through art in action. Excited to help achieve this, they contribute their brains, muscle and creative energy into tasks such as canvassing, ushering, party planning, fundraising and much more. This weekend, we’ll have a whole crew excited to support the festival as we tackle issues faced in the criminal justice system – Dana Brown and Josh Bardier are two of many regular volunteers who have grown to become active members in our community.

Dana was introduced to TONYC shortly after moving to NYC. Familiar with TO in theory, but new to our organization, she began working as an administrative intern and played an active role in supporting the development of the organization, while also training as a Joker. Since finishing her internship, she continues to be a regular volunteer with us and exudes an energizing excitement for the work and tasks at hand. Recently sharing her experience from last year’s Spring to Action 2013: Save The Drama, Dana said: “Legislative theatre in particular is so powerful because we're engaging more than just the audience. The politicians and legal experts are getting to see what the real issues are and then engage in the dialogue with us, while using their power and expertise to then spark a change in a way the actors or Jokers may not be able to. It's collaborative and there's so much potential for true change.”  Dana currently works with a nonprofit that serves the LGBTQ community and notes that her views of injustice and systematic oppression have been impacted by her involvement in TO – as always, we’re lucky to have her in on the action this weekend at Can’t Get Right.

While some volunteers like Dana seek out learning and working with TO, other active community members have been introduced to us through friends and mere happenstance. Recounting his first experience with TONYC, Josh said: “I started volunteering with TONYC at their inaugural ACTIVATE fundraising event in 2012. Despite a lifetime of acting and directing, this was also the first time I participated in Forum Theatre. I thought I was there to simply check guests in or hand out programs like at other theatrical benefits that I had been a part of. However, I soon realized that I was taking part in the creative process to actively find ways to fix real problems in the real world. I was invigorated by the work presented on stage and, ultimately, hooked.”

Gravitating towards theatre that sparks conversation, Josh volunteered again with TONYC at Save The Drama and was “floored by the fact that city legislators were present and committed to taking the voice of the community to their offices to make something concrete happen beyond thoughts and ideas.” Taking their volunteer work home with them, both Josh and Dana also participated in our first-ever grassroots fundraiser this April - Represent! 10x10 Campaign. Along with an outstanding community of other Catalysts, they helped TONYC raise over $10,000 to ensure that this weekend’s festival is completely free – so really, we wouldn’t be here today without the willingness, support and positive energy from our network of rock-star volunteers.

There’s something for everyone this weekend, whether it be through joining the volunteer team, spect-acting in a forum play, or participating in the voting process as we strive to make legislative history. The point is, as Josh put it during our interview: “we all have the potential to be catalysts for change.”