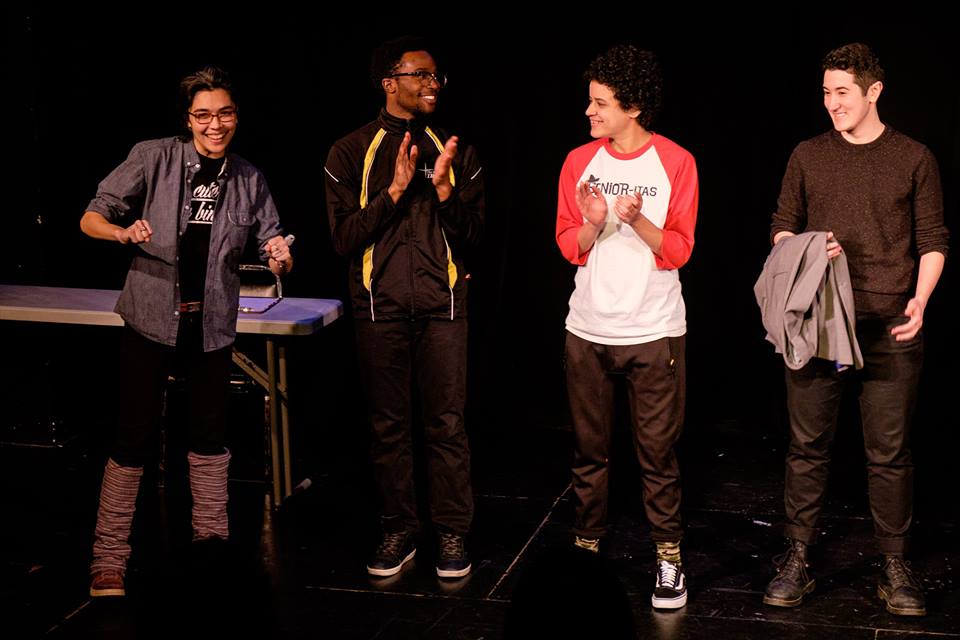 The Ali Forney Center Troupe had an extremely successful run of their production of Trap, a forum play addressing street harassment of queer and trans homeless youth based on the experiences of the actors.

They came together at the The Tank theatre in Midtown Manhattan on Friday, 2/17 for an invigorating performance of the show, and then brought it to students and community members at the Pratt Institute on Monday, 2/22, before finally closing the show on Friday, 2/24 at SAGE in Harlem. Each night held different surprises, with exciting dialogues with audience members of varied experiences at each event.

At The Tank, we had a full house and a great response from the audience, which was made up of many community members and representatives from organizations including the Sylvia Rivera Law Project: a legal aid organization based in New York City that serves low-income or people of color who are transgender, intersex and/or gender non-conforming, the Audre Lorde Project: a New York-based organization for queer people of color, APICHA Community Health Center: health care resource and service providers for the LGBTQ community and undocumented immigrants, and the New York City Anti-Violence Project: an organization that provides anti-oppressive and sex-positive services, training, advocacy and action on-campus and off to people of all genders, in order to address and resist gender-based violence, and all forms of violence. At Pratt, we had students and faculty from various programs, as well as community members from all over attend the show. All of our spect-actors were wonderful participants, and added so much to the dialogue. For our closing show at SAGE, the performance was followed by an intergenerational dialogue with a wonderful range of perspectives on the topics presented in the show.

Here’s a photo of a scene involving the main character, Jyler, who is a queer, gender non-conforming, homeless young person. They are on the subway, and are being harassed by a homophobic person for talking about their sexuality with their friend: 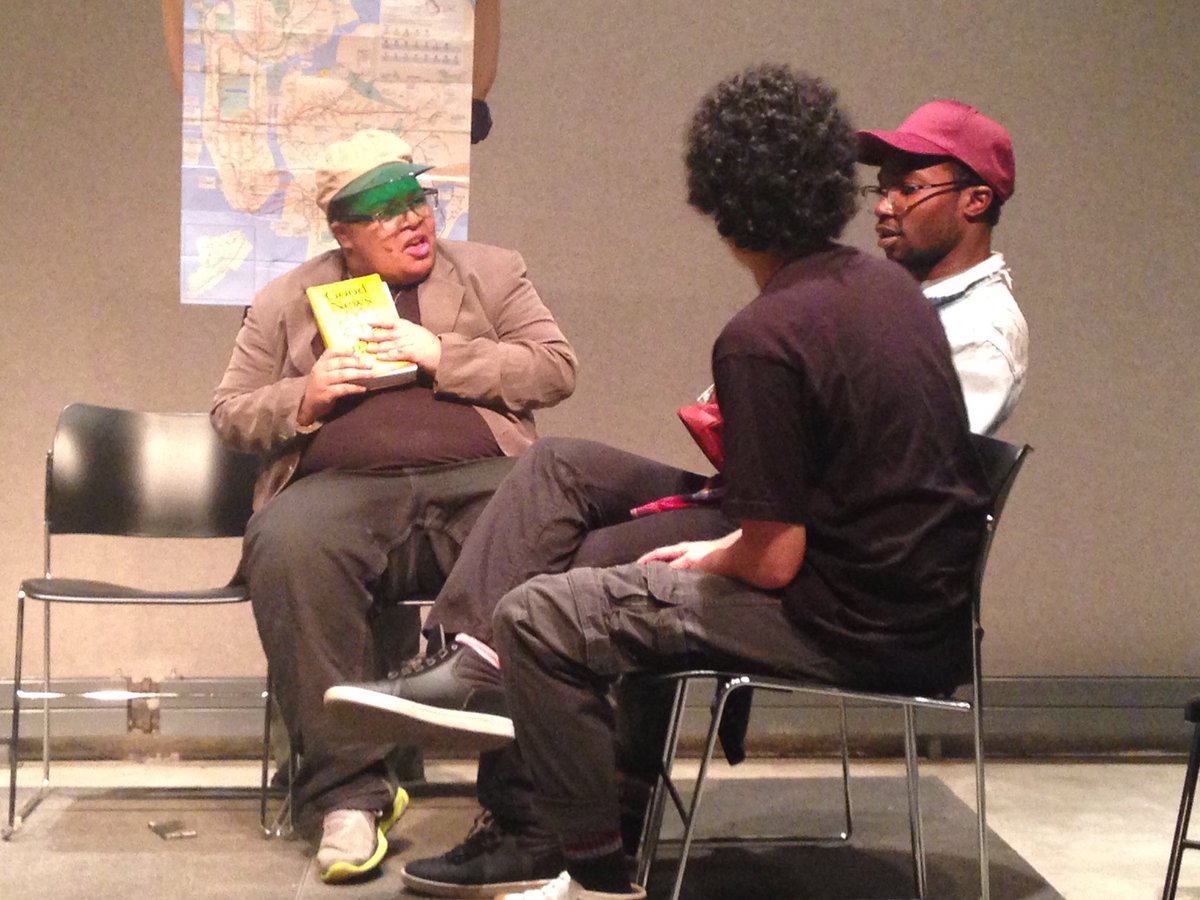 When the time came for interventions, this was a popular scene chosen by spect-actors from all three performances. They chose to tackle this scene and act out some scenarios as the character of Jyler to de-escalate the situation. Spect-actors tried different tactics, such as ignoring the aggressor, switching seats on the train, and questioning him about why he was so personally offended by their conversation. One scenario included an additional spect-actor acting as a bystander who intervenes and confronts the aggressor. This opened up a great dialogue about how accessible these tactics would be in a real-life situations, and how people can advocate for themselves in these dilemmas. 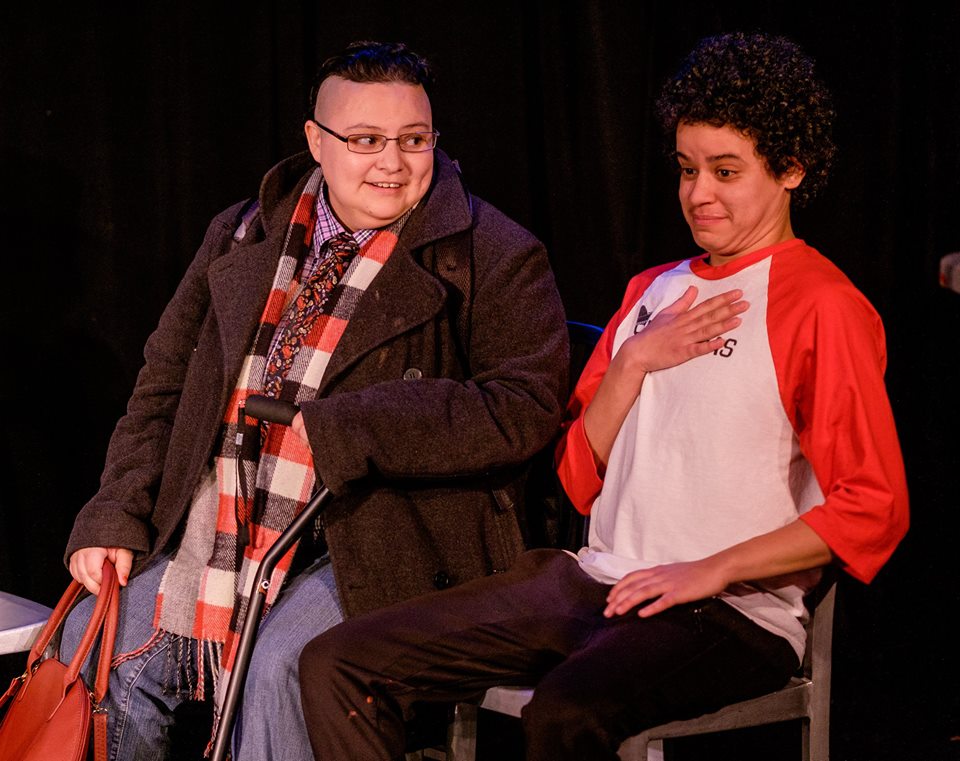 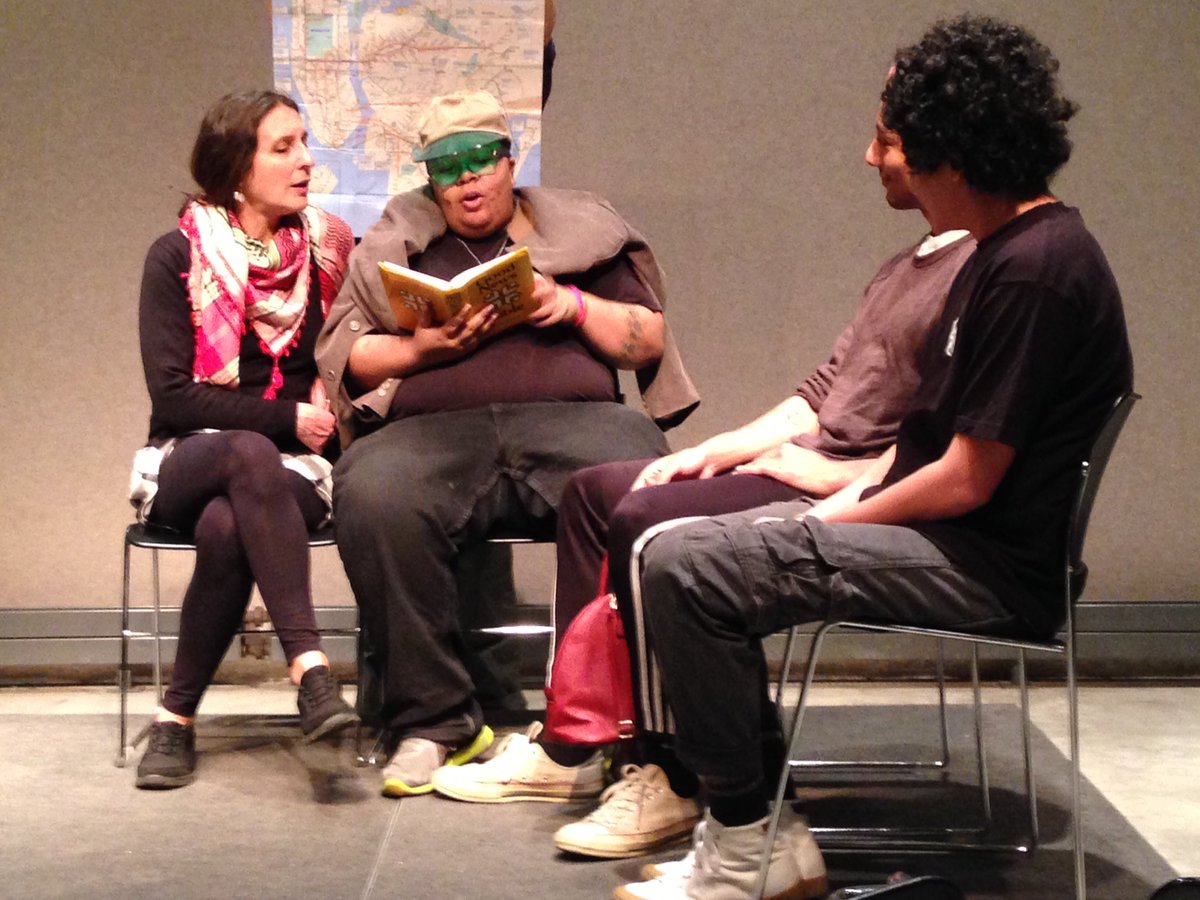 Another intervention revolved around the character of Jyler being told by a worker at their shelter that they haven’t done their chores, which wasn’t true, and in turn were threatened with being kicked out of the shelter. The scene is pictured here: 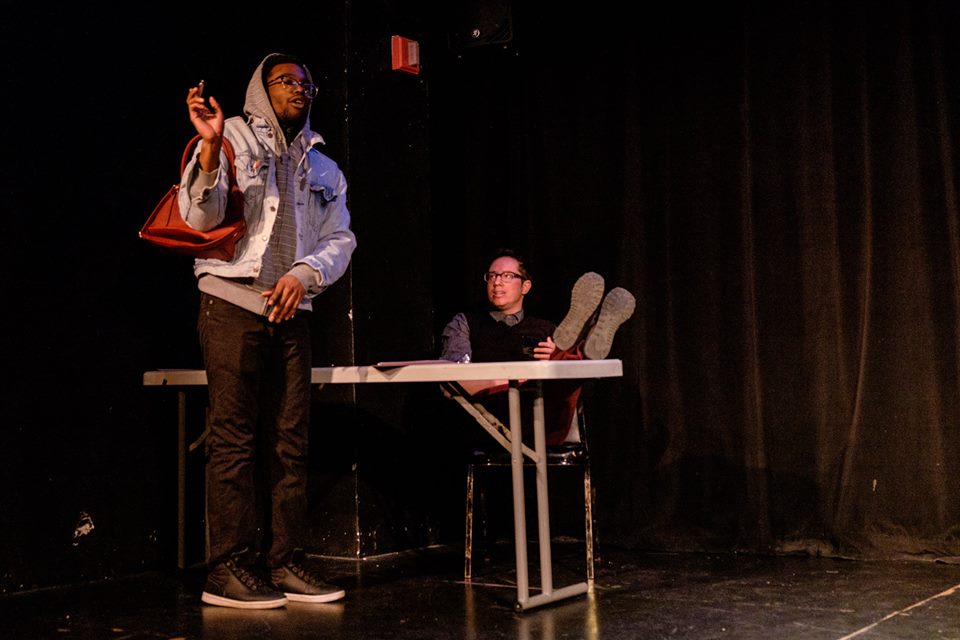 Many spect-actors were eager to intervene with this scene as well. One spect-actor from the show at The Tank took on the role of Jyler, and used many tactics to reason with the shelter worker, including using facts about the situation, and asking to see the security cameras, as well as requesting to speak to the shelter worker’s supervisor. Another spect-actor from the show at Pratt had a similar approach to this scene as well. These strategies opened up a lot of possibility for potential approaches that people in this situation could use to advocate for themselves. One wonderful intervention of this scene came from a spect-actor from SAGE, who did a great job thinking on her feet, and coming up with solutions on the spot in the scene. 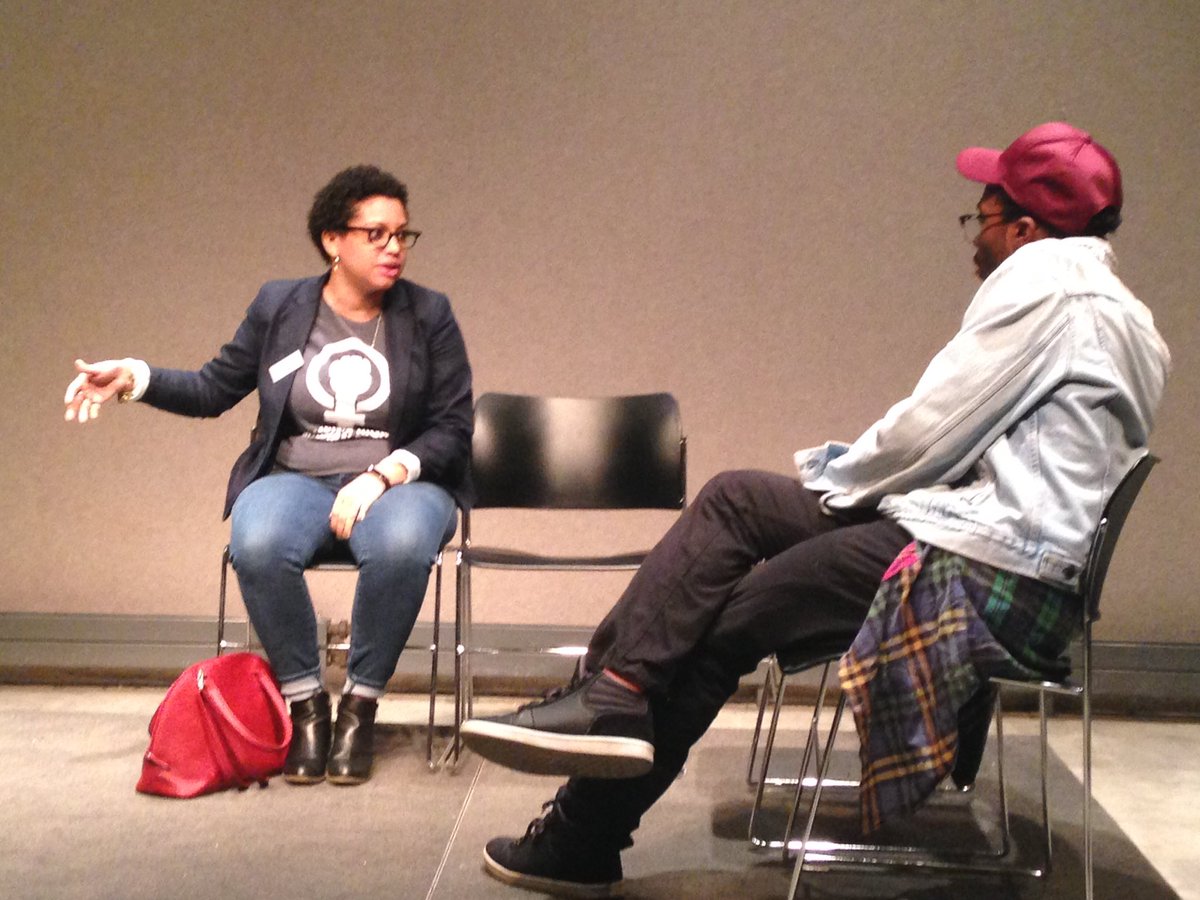 Here is Joker Sophie asking the audience if they have experienced scenarios like what was performed on stage or if they understand what it feels like to have your rights denied: 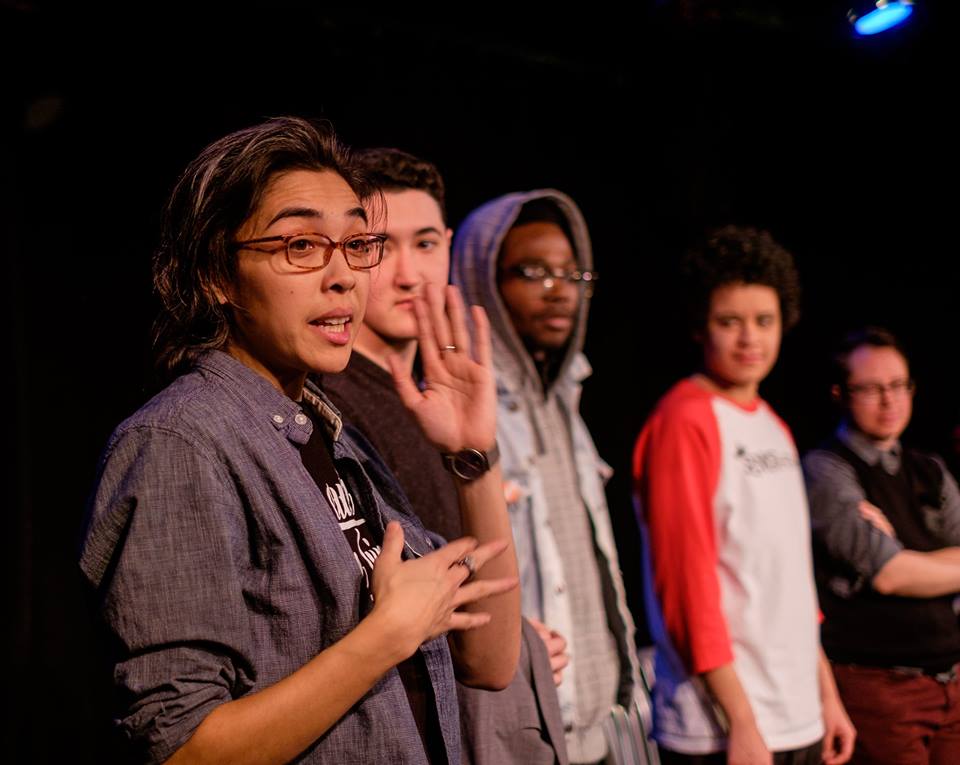 After our show at The Tank, the community organizations who attended gave short presentations about the work that they do, and offered their services to anyone in the audience that was interested or in need of them. They also tabled after the show and handed out information about their services. These organizations work directly with queer and trans homeless youth, and are great support systems for people who may need additional resources. Thank you to everyone who came to the shows, including the awesome actors and Jokers, volunteers, and as always, the spect-actors for sharing their experiences with the themes raised in the play, as well as resources, and ideas of actions that can be taken to change these situations. 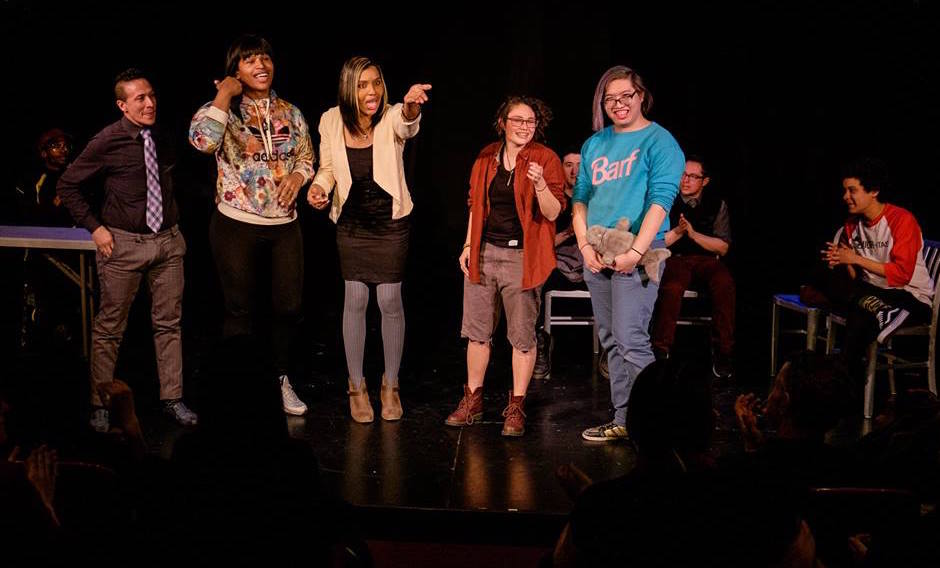 See you in action!