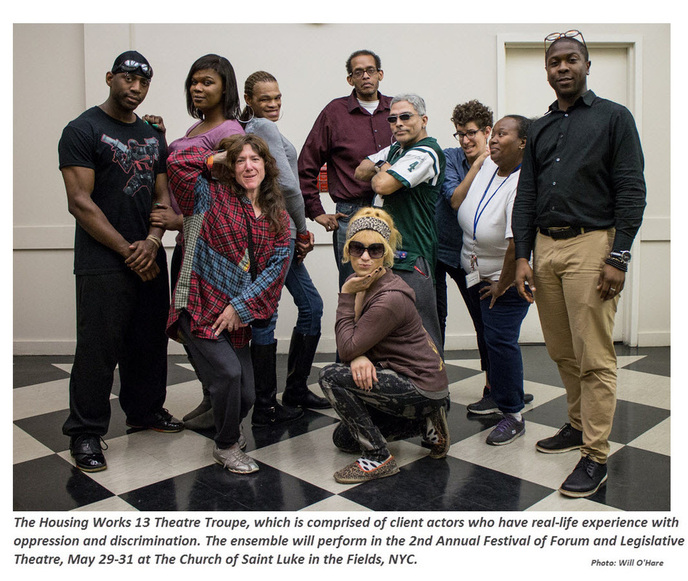 Housing Works is proud to be partnering once again with Theatre of the OppressedNYC (TONYC) for TONYC’s 2nd Annual Festival of Forum and Legislative Theatre, May 29 to 31, at The Church of Saint Luke in the Fields in New York City’s West Village. The theme of this year’s festival, which also includes TONYCcollaborations with the Center for Alternative Sentencing and Employment Services and The Ali Forney Center, is “CAN’T GET RIGHT: Investigating Racism and Profiling in the Criminal Justice System.”

According to TONYC Founding Artistic Director Katy Rubin, the Festival’s main objective is to balance dynamic story-telling with inherently political topics related to social justice and to move audiences to action. “We aim to bring together New Yorkers to witness stories, imagine creative alternatives, and change policy that addresses discrimination and profiling in the criminal justice system,” says Rubin. “It is absolutely political, since we’re advocating for the people onstage getting what they need, but we know that the plays need to hit the audiences emotionally in order to activate them, and therefore need to be theatrically compelling.”

Since 2011, a group of Housing Works clients from the West Village Health Center have been part of The 13 Theatre Troupe, a popular troupe comprised of client actors who have real-life experience with oppression and discrimination. That troupe has partnered with TONYC to explore the unique challenges homelessness and other social-justice issues present to New Yorkers living with HIV, with the idea of using interaction to imagine creative alternative solutions and policies.

Among the 13 Theatre Troupe is client Eli Burgess, 62, a native New Yorker from Bellevue who came to acting two years ago when he was involved in filming community activities at the Housing Works West Village Health Center and the theatre group there was one actor short for a performance. “I left the camera running and jumped in,” Burgess recalls. “I had never acted before that. I have been teaching myself how to be a better performer, and especially to be more patient with others. I’m working on improving myself through the acting.”

Burgess and the rest of The 13 Theatre Troupe have been working with TONYC and meeting once a week since February for the forthcoming Festival to create and perform forum theatre and legislative theatre that depicts discrimination in the criminal justice system. Both theatre techniques are based on the interactive theatre frameworks created by Brazilian director, writer, and politician Augusto Boal during the 1960s. Forum theatre engages spectators directly by performing a scene for them telling the story of someone’s oppression and then asking audience members to take on the role of the onstage protagonist and to consider and offer different, alternative ideas to the outcome in the story they’ve just witnessed. Legislative theatre builds on that same framework by inviting real-life politicians and policy makers into the audience; asking attendees to brainstorm what and how city, state, and federal policies need to change to improve the situation at hand and give people what they need to better themselves; and then having the entire audience vote on concrete proposals that get taken to the City Council.

Rubin describes the challenges of adapting this kind of Brazilian interactive theatre for a United States audience as cultural. In Brazil, solidarity—“that my struggles are wrapped up with your struggles,” as Rubin puts it—is understood as inherent in the values of everyday people. In the United States, our culture tends to emphasize individualism. For troupes doing Forum and Legislative Theatre, that means “we have to work harder to get audiences here to see how the problems presented onstage also affect them, and how they can get up onstage with a new idea not in an advice-giving position, but from their own personal desire for change,” Rubin says. “But precisely because it can be difficult to engage in solidarity-building here, it’s crucial that we try.”

Eli Burgess echoes Rubin’s call for using onstage drama to promote empathy and solidarity when it comes to issues of social justice:

My primary goal is to remind the audience that everything in life could change at any given time. I want to send the message that these are real stories, that ordinary people have gone through. There is always truth behind the scenes. I want to project that truth well. I try to step into the shoes of the different characters the best that I can.

What to Expect at the Festival
Each play being performed at the Festival comes from the community—original stories that come out of the actors’ own lives and connects those experiences to what’s going on in the political landscape. The actors come into the festival with a thorough knowledge of their individual characters and the action being presented in the play, but the script and dialogue being performed remain unwritten to keep things fluid and responsive and to facilitate improvisation when audience members are introduced into the mix onstage.

Some of the performers in the ensembles are actors with political interests, others are activists and clients who use acting as a vehicle for social justice and advocacy. Rubin asserts, “We say everyone is an actor because everyone is capable of taking action: In acting out their stories, the actors in our popular troupes are simultaneously artists and activists, even if they might not have previously considered themselves to be either.“

Those attending the Festival can look forward to Eli Burgess’ performance as a police officer who profiles a man in a park and pursues his interrogation even after realizing the person he is targeting doesn’t match the description of the criminal he has. For Burgess’ part, he’s focused on trying to use the medium and the empathy the stage can inspire in participants to remind them of what’s possible and their own agency in making those possibilities a reality: “I hope the legislators and everyone coming to the festival will enjoy the show and support our cause.”