What Is a "Good Girl?" Madalena NYC 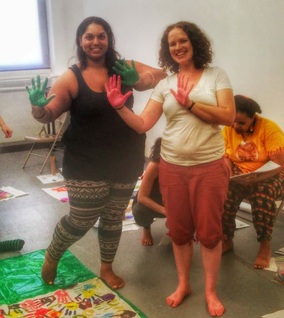 I didn't know what to expect, but like any other workshop attendant I was there to just soak it in.

Throughout the day we explored what it meant to be a “good girl.”  We created characters and choreography representing different women produced by “good girl” ideologies. Mothers, business women, and man- haters all took to the stage.  These characters sang, danced, and argued. The afternoon was rich in ceremony as the Madalena workshop celebrated the work of women in Theatre of the Oppressed. However, my biggest takeaway was the beginning.

We started with names. Of course, the same way I’ve done for years of my life, I introduced myself this Sunday morning as Rosie. For the first time ever, this introduction felt fake. I cringed a little, and immediately was trying to figure out in my brain how to undo having all these women call me Rosie for the rest of the afternoon. I was in serious internal turmoil. Luckily we had several games to play with our names and I was all like “uh can I change my name? to Rossanna for this?” I felt like I was so weird. “What’s wrong with this girl?” Everyone was thinking it, but I needed not to be Rosie anymore.

The game was actually really affirming to this decision, because we were to begin repeating our name with only the vowel sounds. Oh-EE, Oh-EE, Oh-EE… That sounds dumb, I didn’t like it all. Oh-Ah-Ah, Oh-Ah-Ah, Oh-Ah-Ah…. YES! That’s me… Oh-Ah-Ah… That’s my name… Oh-Ah-Ah... I was having a moment. Then the moment passed. I had reclaimed my name, really confronted the implications of anglicizing my name and really embraced my name. I embraced me. Rossanna. Not the “good girl Rosie.” Rossanna. Oh-Ah-Ah.