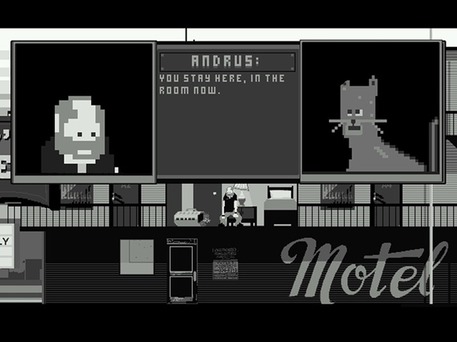 Everyone stands in a circle, or the closest approximation we can given the shape of the room, facing each other with anticipation. An actor swings their arm in an underhanded motion across their body to the left. The actor to the left of them quickly makes the same motion, also to left...

...The next person points to someone across the circle from them and shouts “Gunslinger!” The actor who was pointed to makes a diamond with their hands in front of their body and says “Ricochet!” in return.  The actor pauses for a moment, unsure of what to do next. The moment goes on too long, the whole group yells “Fire!”, runs about, and finds a new spot in the circle. The game continues.

In Theatre of the Oppressed (TO), we start every rehearsal with a game. Games are a large part of the process of TO, where practitioners use them as mental exercises to examine mechanization,  inspire imagination, encourage solidarity with troupes, enhance the theatricality of scenes, and of course, to have fun.

The model of forum theater is also, in many ways, a game. After audience members view a play, they are invited on stage, where they play as a character. There are rules in the game of forum, and an end goal as well. As someone who loves video games, I can’t help but see the similarities between forum plays and video games. Both are interactive methods of storytelling where interactivity is used to inspire audience identification with the player character. Both are media where the audience directly experiences the events in a story, since in both forum theatre and video games there is an onus on the participant to take action in a situation, rather than simply watching a series of events unfold. Considering the ways that forum theatre resembles video games, are there then video games that in turn resemble TO?

Take for instance Papers, Please. Set in the fictional dystopian country of Arstotzka, the player takes on the role of an immigration inspector, checking documents, fingerprints, and body scans to keep what the administration has decided are “undesirables” out of the country. Every day, the player receive new memos from the administration about what to look for on passports and work cards. Many people that come to the player’s desk lack the proper documents. Some of them are on the run from violent ex-lovers, or have family on the other side of the border. If the player decides to let them pass, their pay may be docked, and there is a family at home that needs food and medical supplies. Others potential migrants have made convincing forgeries, and if the player doesn't notice, a terrorist could be allowed to cross the border, where they will then set off a bomb, killing dozens in the vicinity.

Papers, Please incorporates many aspects of a forum play. The game allows the player to make choices, and responds to them, much like how actors will push back against an audience member’s intervention. The player has the option to do what they feel is right in morally ambiguous situations but, like in a forum play, there are consequences. The game, though set in a fictional county, comes from the developer’s real life experience with immigration, just as TO scenes all start with a personal story of an actor.  The experience of playing Papers, Please feels very similar to coming on stage at the end of a play, assuming the role of the protagonist, and trying to change the scene, except in Papers the player is the protagonist for the entire play as opposed to just one scene.

Another game worth mentioning (and worth playing) is Cart Life. In Cart Life, the player takes on the role of one of three playable protagonists; Melanie, Andrus, and Vinny. Each have their own stories. Melanie has just gone through a divorce and wants to keep custody of her daughter. Andrus just moved to the states and needs to find a place to live. Vinny needs to pay rent. Each character owns and operates a street cart of some kind, and the gameplay is centered around running said cart. Players also need to take care of everything else in their character's life.

I’m currently playing the game as Andrus, who moved to the city from Central Europe. Andrus doesn't know the city very well, since he’s just arrived, and finding where to go for the things he needs is a trial and error. Transportation costs money, and takes time, which there is a limited amount of in the game. Andrus owns a newspaper cart. Running the cart is done through mini games, and messing up means losing inventory or customers. Andrus also has a cat with a very silly name, which needs feeding and looking after. In my current playthrough, the cat has run off to somewhere in the motel at which Andrus is staying at. The motel, it should be noted, does not allow pets, and I’m concerned something terrible has happened to Mr. Glembovski.

There are many similarities between Cart Life and TO plays. Each playable character, like the protagonists in TO plays, faces an oppression. Melanie is a single mother trying to prove to the court that she is financially solvent enough to retain custody of her daugher, and Andrus must deal with being a recent immigrant to the states, trying to make enough money to have a place to live. The player, as in a forum play, steps into the protagonist’s shoes and tries to get what they need. The game doesn't limit you in what you can have the character do (though I have not encountered an option to be violent yet, according to the developer, there is an opportunity for violence), and there are many opportunities for making meaningful choices which change the outcome of the game. The stories in Cart Life also come from real life. The developer made the game while “working a series of crappy jobs” and and based some of the game on his experiences.

The situations presented in Cart Life are familiar and very similar to projects TONYC has done in the past.TONYC made a documentary about street vendors, and has often done plays revolving around the issues that come from poverty. Papers, Please also deals with the familiar topic of bureaucracy.  Many of TONYC’s projects are related to the difficulties of needing to enter a system to get something a protagonist needs, and many also look at the struggle of being a gatekeeper in such a system.

Video games and forum theatre are both interactive storytelling methods. Video games are great at being entertaining pieces of media, and as TONYC looks at making plays that are more entertaining and engaging on top of being educational and solidarity building, many of the patterns of good game making are applicable. Thinking about the pacing of a play, from an overall perspective and from an individual interaction perspective, could help make plays that are more fun to watch and more fun to intervene in. It would also be interesting to consider what mechanics could be developed to condense a complicated process into something playable in the context of a play. For instance, making the process of gathering all of the necessary documents for a bureaucratic process (something that happens in many of our plays) into a playable game that could happen on stage, or that the whole audience could do.

Below are links and descriptions of games that share things in common with TO and forum theatre. Most are playable in browser and free. Hopefully these might generate some cool ideas applicable to forum theatre!