Trying On My Joker Costume 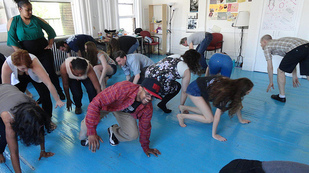 Last weekend I wore my meta-hat. Then I took it off. Then I put it back on again. The Level 2 training was a chance to try on my Joker costume, to see where it fits and where it needs fitting. As much as I want to dress the part – to seamlessly facilitate “Opposite of Jackson” and then spark a riveting discussion about de-mechanization – it turns out I still have more tailoring to do. We all do. That’s why we were in training.

The Level 2 workshop marked the eleven month anniversary of my involvement with TONYC, and of my love affair with theatre for social change work. While advocating for domestic violence survivors with AVODAH: The Jewish Service Corps, I thought that I might want to empower women to voice their stories through performance. I told that to anyone who would listen, until finally someone asked, “have you heard of Theatre of the Oppressed?” I hadn’t, until just then.

Last March, on the train ride over to TONYC’s Level 1 training, I didn’t know what I was getting into. I had made my spect-actor debut at a Concrete Justice show two months before, where I learned one of the few facts I knew about TO: that it was what I wanted to be doing all day, all the time. Losing my identity during “Name Gumbo” and not getting what I needed during the “Handshake Forum” affirmed that fact, and introduced me to other Boalisms that would compel me to play more, and to intervene more.

I’ve spent the last year thinking about how to rehearse social consciousness, and what it means to perform anti-oppression work. And I’ve accumulated a large pile of thoughts, some of which I sorted through on the train to the Level 2 training last weekend. This time around, I knew what I was getting into. I knew the games and what they mean. I had become the asker of the question that I believe everyone has the right to be asked: “do you know of Theatre of the Oppressed?”

Of course, I was as wrong as I was certain. I can play “Opposite of Jackson” until the end of time, but that won’t make it any easier for “jump” to mean “clap”, or to parse the ways in which my gender identity has been programmed. It also won’t mean that I can anticipate how a crowd of rowdy Jokers might derail even the most gracefully executed of games. Different from the Level 1 training, in Level 2, each participant Jokered a game and a section of a forum play; then, we received individual feedback on our accuracy, ethics, and style. Real, honest feedback can be hard to deliver and harder to hear, but knowing that we were there to brainstorm ways that we can all be more accurate, ethical, and stylish helped me to listen without self-judgment.

As the training came to a close, I noticed that it had happened again. A room full of people who I didn’t - and still don’t - really know became a community that I trust to tell me where I excel, and where I have room to grow. They told me that my Joker costume is loose in the waist, and that the sleeves are too long. But I think I’m growing into it.