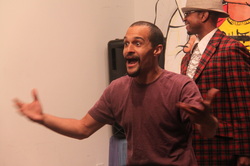 By Mike Gonzalez: “The Sanctuary”: a reprieve from the daily frustrations commonly experienced by those of us who have endured homelessness.  Atop the stairs that led from the side entrance of a church tucked cozily into an otherwise bustling and narrow sidewalk awaited an uncertain but immovably tenacious woman who had this radical idea that somehow the motley crew that stood (or sat) before her could somehow affect change by putting on a play about our personal experiences.

Cynical as I often can be, especially when my brother, Moon, and I had spent early morning collecting our cardboard boxes before trekking fifty blocks uptown to wait three hours for a shower, I had completely dismissed Katy Rubin as being some sort of hopeless romantic with delusions of grandeur about saving the world, one disadvantaged person at a time.  Of course there were wholesome snacks and refreshing beverages set beside us and I figured it couldn’t hurt to listen to what Katy had to say while noshing on something other than soup kitchen fare.

Soon we were all on our feet in some version of an encampment circle.  We began with these games that were intended to get us to loosen up which included erratic hand gestures and primal noises.  We imitated one another and those of us whose arms were folded across our chests began to smile hesitantly and soon we were sharing fragments of our stories.  Without us realizing it at the time we were also sharing camaraderie.
When the session was over I thanked Katy and remember feeling a bit lighter that afternoon.  Here was an opportunity to lessen the burden of homelessness which is more than just being without a home.  It was a catalyst to not only sharing some of the hardships that come with being on the street but to changing the way the world sees us.  While dwelling among the denizens of one of the wealthiest zip codes in the nation, it is easy to be cast aside and dehumanized in the minds of those who have never gone through what we were going through.  Discussing these frustrations with Katy and the group allowed me to be free, even if only for a moment.

Each week I found myself making my way back to the Sanctuary for another session (and maybe even another snack).  Each time I divulged a bit more of my story.  In opening up to each other we were inspired to let our guards down.  Most of us began to realize how similar our struggles were and began to meld our stories together, focusing on the common themes of unemployment and job discrimination, a biased court system and the reality of being without shelter.  Our first play, “It Could Happen to You,“  addressed these topics and, as the title suggests, sought to awaken the general public to the possibility of facing these very same issues.  The response was more than I had expected it to be with audience members eager to participate in our post-performance forums, engaging us in conversation.  Suddenly, our voices were heard.

Instead of being a victim of circumstance, I began to see how I could empower myself and my community with theatre.  Katy went into more depth about how Theatre of the Oppressed works and how we could be the effectors of change, rather than upholding some inaccessible, bureaucratic structure.  Soon others in the field of theatre and social work began attending our workshops to observe and even collaborate with some of their own ideas.
Word began to spread of this troupe that infused performance art with social reform to create this unique platform for dialogue and action.  We went on to produce “Hellter Shelter” and “Park Bench Prophet,” plays that addressed the corruption and discrimination that exists in the housing system.  We were being interviewed and photographed (sometimes reluctantly) by local publications and graduate students who took an interest in our work.  We were invited to schools, art spaces, religious institutions and even traveled out of the city a few times to bring our brand of social awareness to communities that may otherwise have not been aware of the anonymous souls that shared their backyards.

We use labels in our culture not only to identify but we also use them to marginalize those who we cannot relate to or understand.  Homeless, vagrant, bum, junkie, drunk, addict, nut, crazy are all words I’ve heard used to describe people who live on the street.  A look of disgust and contempt sweeps over the face of most people who even catch a glimpse of a man or woman resting on the surface of a sidewalk, park bench or subway seat.  I found myself among those who had been rendered subhuman in the eyes of mainstream society yet Theatre of the Oppressed NYC (TONYC) became a vehicle for transforming not only how the world perceived me, but more importantly how I viewed myself.

Performer, published author, co-facilitator (or Joker-in-Training as we refer to ourselves), board member, emcee, student and employee are other labels that began to overshadow all the others.  But what mattered most is that the label didn’t matter. The work that I was doing at TONYC became invaluable.  Participating in the exchange of ideas and development of strength and empowerment that TONYC helps marginalized communities realize is so profoundly rewarding and the reason I continue to be a part of a grassroots organization whose continual growth I have been fortunate enough to witness from day one.

Cliché as it might sound, I have truly learned so much from the people I have worked with over the years.  It is so refreshing to see that humanity not only still exists but flourishes here in New York City.  If you doubt that, just attend one of our shows, sign up for a Joker Training workshop or watch one of the many interviews with our staff and performers available online.  As I always say, part of what I think separates TONYC from other not-for-profit organizations is that we place the power in the hands of the people.  We go beyond picket signs, petitions and demonstrations.  We come to you, bringing the noise and then challenge you to engage in the conversation with us so that together, as one community, we can at least try to find a solution.

We don’t believe in fairy tales here at TONYC.  I am not perfect and this was not some miracle that saved my life.  I struggled with my own personal issues but Katy, TONYC and my partner continued to have faith in me, and for that I am grateful.  I cannot imagine missing out on the experiences that I have had with everyone involved with TONYC.  I believe in change because I see it happening all the time with our troupes, with our audiences, with legislators and with one another.  It most definitely is not easy, but it is possible.  So who knows?  Perhaps the revolution will be televised.  Stay tuned.