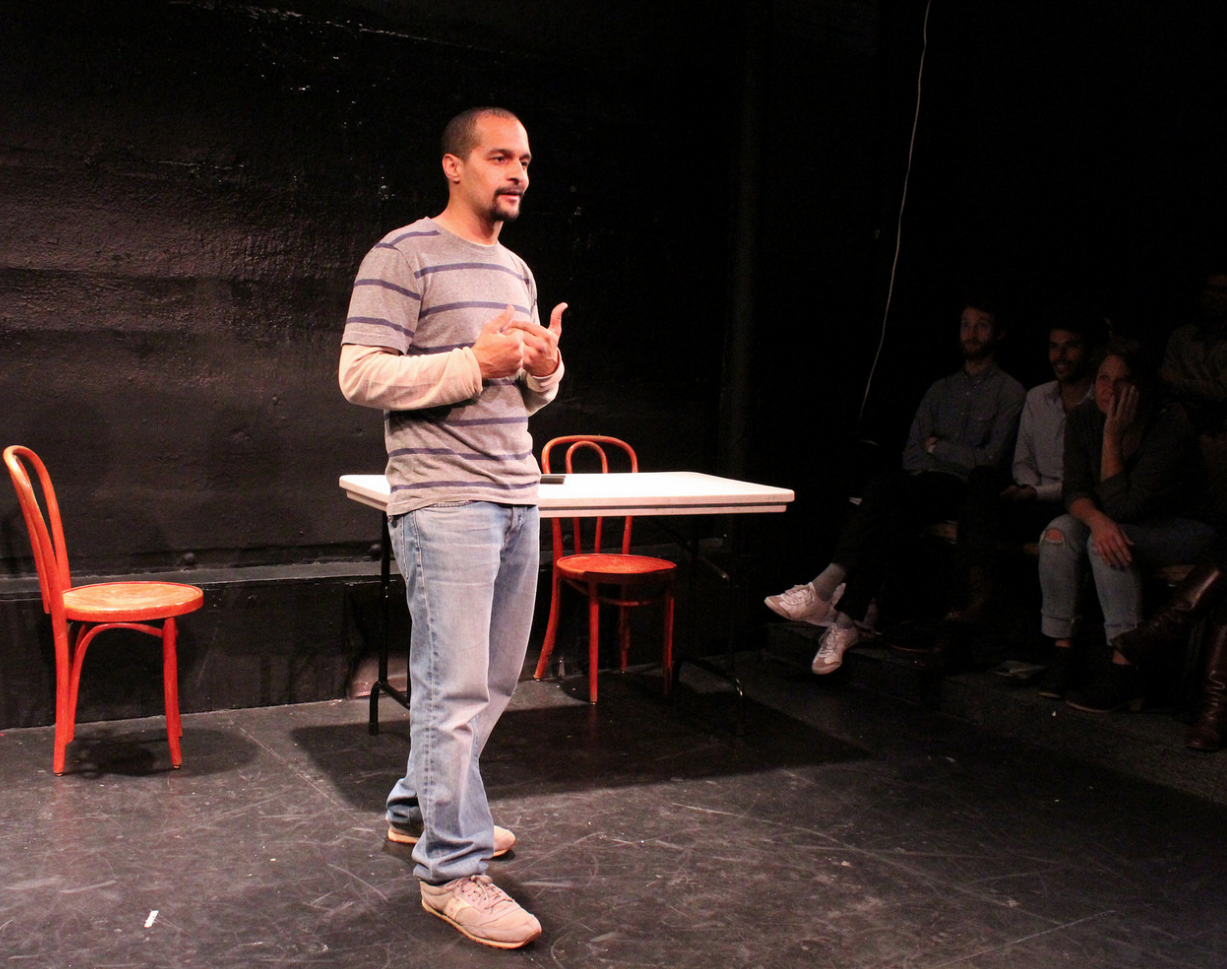 Greetings. My name is Mike and when I began my journey with TONYC back in 2010 most people knew me as Monk. I am fortunate to have been a part of the original ensemble that is currently known as Concrete Justice, TONYC’s first and longest running troupe comprised of human beings who struggle with the challenges that come with the experience of homelessness. Over the years I have played several distinct roles within the organization as an actor, facilitator, board member, event host and most recently as a Criminal Justice Advocate.

My goal as an advocate is to connect with potential partner organizations, learning about their efforts to reform the criminal justice system as it relates to those who are directly affected by it and offering what TONYC can provide by way of support to further our common cause for lasting, effective change. Unfortunately, our justice system is anything but balanced. The scale is often tipped in the direction of those who have the socioeconomic status that allows them the privilege of escaping the harsh consequences that many citizens from less advantageous circumstances find themselves facing. The latter mentioned communities are overwhelmingly Black and Brown creating a disparity that begins early on in what is known as the school-to-prison pipeline. One organization that is working to bring an end to the policies that reinforce the pipeline is Teachers Unite.

Working alongside the Public Science Project (PSP) at the CUNY Graduate Center, Teachers Unite (TU) hosted a dinner on April 17th to launch their CPAR (Participatory Action Research) project that aims to empower teachers, students and parents in the conversation about school safety and accountability. This initiative that allows students to resolve their own conflicts alongside faculty members in peer circles is called Restorative Justice (RJ). RJ is radical putting much of the power and decision making in the hands of the students, a concept that is in direct conflict with the way most public schools have structured their approach to conflict resolution. Black and Brown students are far more likely to be suspended and even expelled from school for something as minor as violating a dress code or consistent tardiness. These aggressive punitive measures for such infractions have proven to be ineffective. Students are more likely to fall behind in their studies because of missing out on school, having a suspension or expulsion on their record can have far reaching negative consequences that affect their options for higher education, parents may have to miss out on work which can be very detrimental to a household with a limited or single income as can be the case in some of these situations and the action itself robs the student and their family of an opportunity to be part of a conversation that may help to figure out what underlying issues might be at the root of a student’s behavior or challenges.

The concept of peer circles is not new. I learned that many Native American communities in Northern America have long recognized the importance of Talking Circles both for their symbolic and practical significance. Native peoples have used these circles to resolve conflicts, discuss relevant matters and simply strengthen the community itself through fellowship. This approach has proven successful and in the early 1990’s, members of First Nations in Canada introduced Talking Circles to non-Native people as an attempt to find more effective alternatives to the vastly disproportionate incarceration rates of indigenous people in these communities. It was interesting to hear how this model was proving successful with the Lyons Community School in Williamsburg. Representatives of Lyons discussed how the implementation of peer circles has nurtured a sense of family between the students and administration opening the lines of communication and minimizing conflict. In contrast, two parents who were representing schools in the Bronx District were concerned with how to deal with the pushback that comes from administrators who are not willing to engage in peer circles and comply with RJ. Even Rebecca Del Toro, an educator and Organizing Council member of Teachers Unite, has expressed the frustration of trying to convince some members of the United Federation of Teachers (UFT), school safety official and other administrators of the long-term effectiveness of RJ. It's believed for some teachers there is the fear that RJ presents a platform for positive solutions to conflict but there is not enough clarity about what the consequences would be for 'problematic' students. It also may come down to a power struggle between the adults and the youth, with this idea that adults inherently know better than the kids they are teaching, who inherently know little about how to navigate through the very situations they are directly involved in. For others, such as union leaders, it becomes a matter of not rocking the boat. A steady foundation has been established over the years putting some administrators in a very comfortable position regarding job security, pay and power structure.

Part of Teachers United's mission is to reinvent the UFT in a way that is as democratic as a union should be by creating alliances within the union and other institutions. It's an infiltration of sorts that aims to fix the problem from directly within the system at its nucleus, similar to what we at TONYC aim for which is to give a voice to the people so that they may be the agents of change. We then gathered as a group once again to discuss what we took away from our discussion and what questions may have come up for us. It was apparent that RJ is a functional model that produces results when applied. However there still exists the issue of finding a way to push through or get around the resistance to RJ within the educational system. There was a lot to unpack, as there usually is with this type of work, in a limited period. I think the focus of this meeting was to make everyone more aware of exactly what Restorative Justice and Participatory Action Research is all about. Teachers United is working hard to prove that eliminating suspensions and other excessive punitive measures while focusing on communication and relationship building between students and faculty is the best way to minimize conflict and ultimately end the school-to-prison pipeline.