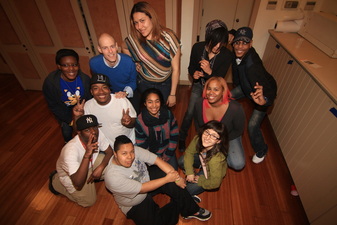 Can’t Get Right, Theatre of the Oppressed NYC’s second annual Legislative Theatre Festival, will include plays created by troupes based at three different partner organizations: Housing Works, the Ali Forney Center, and the Queens Justice Corps. This week, I spoke to the unsung heroes of these partnerships: the dedicated and passionate staff. Though each organization has its own mission and body of work, all three partner staff--Candace, Penny, and Tenaja--described similar intersections between their work and Theatre of the Oppressed, and shared their hopes for the upcoming festival.

It was shortly before Candace began at Housing Works West 13th as Recreation Coordinator that TONYC’s founding Artistic Director Katy Rubin first made contact with the organization. Housing Works had not had a theatre program in several years, but several clients showed up for the first rehearsal, and from the beginning, Candace says, “they took to it.” Some of those earliest participants are still with the Housing Works 13 troupe today.

Housing Works, founded in 1990 by veterans of ACT UP, provides housing, medical, and support services to New Yorkers living with HIV and AIDS. As a Recreation Coordinator, Candace uses “a variety of modalities to help clients express themselves and become better advocates in their lives.” Having trained as a Creative Arts Therapist, she believes that Theatre of the Oppressed is “inherently therapeutic,” but goes a step further into the realm of advocacy: helping clients to connect their experiences to the community outside of Housing Works.

Performing past plays like The Worm in the Big Apple, Stigma in the City, and We’re Shady, We’ll Call You Back has given Housing Works actors the opportunity “to share their stories, but also educate the audience about what really happens in their day-to-day.” Candace believes the Forum Theatre process “creates solidarity among the actors and with the audience,” allowing them to say, “This isn’t just my story—it’s everyone’s story.” In keeping with that sentiment, Candace usually performs alongside the troupe.

Penny Ferrer had created and performed Forum Theatre as a student at the University of Texas at Austin, through a program called Voices Against Violence. So when she first started working at the Ali Forney Center, as a counselor for LGBT youth in AFC’s shelters, she was excited to find out that AFC had a partnership with TONYC--and when she became an Intensive Case Manager, she asked specifically if she could work with the troupe.

Like Candace, Penny values Theatre of the Oppressed’s unique cocktail of art and advocacy. “We’re always looking for groups where the youth can be out in the community doing direct advocacy work or being part of a movement,” she says, but few partnerships have lasted as long as the one with TONYC. “At this point, the young people really expect it. I’m already talking to people about the next cycle—people who couldn’t be a part of this cycle are already asking me about August.”

Returning to the Legislative Theatre Festival after performing in last year’s inaugural event will provide the AFC youth with another rare opportunity to rub elbows with LGBT politicians “who are really making a difference,” like City Council members Brad Lander, Corey Johnson, and Majority Leader Jimmy Van Bramer. But it’s not all about the bigwigs--it means a lot to them to spend time with the other troupes. At last week’s joint rehearsal with the Housing Works troupe, AFC actors were “excited to be around some older LGBT folks,” Penny says. "It’s a way for them to access a connection to their broader community.”

And just as importantly, “they feel really proud for doing something they developed. They often bring their friends. They’re really proud to be part of this.”

The QJC troupe performed their very first play, Can’t Get Right--from which our festival takes its title--just this past February: first at the Afrikan Poetry Theatre in Jamaica, then at the John Jay College of Criminal Justice. “At the beginning I was a naysayer,” Tenaja admits. “I was skeptical until I spoke to Katy and I understood the model, and then I said, ‘This is a perfect fit for us.’”

In the QJC program, which is voluntary, “We help people look at some of the things they’re saying and thinking, and look at them a different way,” Tenaja explains. “It’s about putting young people in the driver’s seat...The artistic process fed our process.”

As with the other troupes, the process of creating a forum play tapped into the QJC actors’ creativity and need for self-expression. “Our young people, they struggle to participate meaningfully in education or employment, but they’re all thinking about their experience,” Tenaja says. “They write, a lot. Whenever they have a lot of downtime, they’re freestyle rapping with each other about elements of their lives.”

But sharing their stories with a wider audience has a different impact. “I think about the John Jay performance,” Tenaja reflects, “where we had a hundred people in the room, and the kids had to internalize that. ‘A hundred people came to see us. A hundred people were interested in what we’ve been through.’ And I think it did something for their self-efficacy.”

Tenaja is most looking forward to the Legislative Theatre Festival because, she says, “I love taking the young people out of what they know. I love giving them challenges to rise to. I’m excited to see them rise to this, because they always do. And I love the look on their face when they’re like, “Wow, all these people came out for me.”

Stay tuned for next week’s installment: “Meet Our Partners, Volume II,” in which Candace, Penny, and Tenaja each share their own legislative wish list.