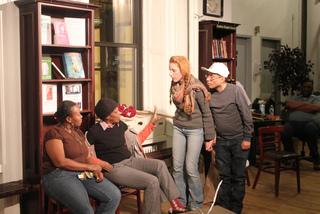 Last week, we met the staff at our three partner organizations for the upcoming Legislative Theatre Festival: Housing Works, the Ali Forney Center, and the Queens Justice Corps. This week, inspired by the festival, Candace, Penny, and Tenaja each share with us their dreams for meaningful policy change in New York.
Candace Rivela, Housing Works
One of Housing Works’ top legislative priorities is the Gender Expression Non-Discrimination Act, better known as GENDA. “The current law provides very little protection from discrimination based on a person’s gender identity or expression,” Candace wrote me in an e-mail. “Passage of the bill would make discrimination in areas like employment, housing, and public accommodations illegal.” She says her clients are often targeted by the police for stop-and-frisk “for the way that they look, where they might be located, who they might be affiliated with.”

She was encouraged by February’s announcement  that after several years of advocacy by Housing Works and other groups, Mayor Bill de Blasio and Governor Andrew Cuomo reached an agreement to enforce a 30% rent cap for the 12,000 New Yorkers living with HIV/AIDS. Under the rent cap, a New Yorker with HIV/AIDS cannot be made to pay more than 30% of their income towards rent.

But there are many more issues that might still be addressed on the policy level. Housing Works is a “harm reduction agency,” says Candace, which means they provide certain services like needle exchange: providing injection drug users with clean needles to prevent the spread of HIV and Hepatitis C. Candace says clients who struggle with addiction are often turned away from other agencies that that require abstinence. “Can the state influence other programs to accept active drug users?” she wonders.

If Penny could change any law, she’d wish for her clients “to not get ticketed for jumping the turnstiles, if they can show that they’re homeless.” The Urban Justice Center has a clinic for AFC clients once a week to help them deal with this issue, among others. “Our young people and a lot of folks needing social services talk about, ‘Well, I can’t get to my appointment, or to the doctor you’re trying to send me to, if I don’t have a Metro card.’ All these nonprofits in the city spend so much of our money to pay for MTA cards, and we literally have to offer them or people just won’t come. Clients will say ‘I risked a ticket in order to get here. I risked arrest in order to get here.’ I hear that a lot. And that means that they’re often holding back from accessing services, because they have no legal way of getting onto the train. And police actually will sometimes lie to them and tell them that asking for a swipe is illegal, even though that’s not true—it’s illegal to buy and sell a swipe, not to get one for free. So there are things that they can get, that they’re afraid to get. We’re basically telling them they have to put themselves at legal risk to get services.”

The other item on Penny’s legislative wish list? “I want sex work to be decriminalized.” She explains: “If you look at the statistics, homeless youth and especially homeless LGBT youth are targeted both by consumers of sex work more than their straight counterparts, and they’re targeted more by people who want to run sex work as a business. And really, in the eyes of many of our clients, it’s unavoidable at some point during homelessness. Sex work for many of our clients is a result of the crises that they’re in. Adding legal problems on top doesn’t help them to get out of homelessness or access any services.” In fact, they often have to be at court during the time when they might otherwise access services. “We have a doctor who comes in one day a week. If that’s the day they have a court date scheduled, they never see a doctor.” Plus, “once it’s on their record, it’s much more likely they’re going to be arrested if they’re stopped for anything else.” If they’re walking in a place where sex work is known to happen, and if they have sex work on their record, “the police are going to assume the worst about them.”

(Sound familiar? You must have seen Concrete Justice’s most recent play, The Housing Circus, which took aim at the city’s barely-paid Work Experience Program)

“Mandatory minimums for victimless crimes have to end,” Tenaja adds. “For drug possession, mostly. If you’re dealing large quantities of cocaine, yeah, you should be stopped. But if you’re a kid who had a couple of dime bags on him, you shouldn’t do twelve years for that. It’s not a violent crime. There are other ways to sanction that young person.”

In a promising development, Joel Copperman, CEO of the Center for Alternative Sentencing and Employment Services (CASES)--the QJC’s parent organization--was recently announced as a member of Governor Cuomo’s new Commission on Youth, Public Safety, and Justice.

--
Will these issues come up at Can’t Get Right, in the performances or the debate? Join us May 29-31 at St. Luke’s to find out. City Council members and other local and state policymakers will be in the audience to hear these stories from New Yorkers affected by unfair laws (or the lack of fair ones) on a daily basis. We won’t solve all of these problems, but as at every TONYC performance, the actors and the spect-actors will show us that change is possible.