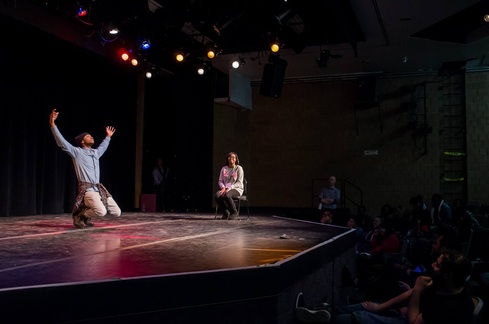 Getting to rehearsals for a new troupe is always a new adventure. It’s all about getting there fast and close and from the various places I might be on a given day - full of getting on express train when I need a local, maximizing transfers and figuring out how to improvise new routes when on familiar routes just stop.  Making a Forum Play is similarly path-full, with many ways to arrive at an actor-created play that will challenge the institutions and agents of oppression.

Here at Theatre of the Oppressed NYC (TONYC) we've been following Augusto Boal's map, interpreted through Katy Rubin and then reinterpreted by the various Jokers and Jokers-in-Training as we work alongside troupe members in the rehearsal room.  Although we always includes the playing of games designed to uncover how oppression works, the way we tease out the actual stories that will end up on stage is starting to see a shift.  The way we typically got the stories was: actors would tell their real-life stories of oppression and through a process of a simple round-robin story consolidation, we'd arrive at two or three stories that everyone could relate to.  The wrench? After a few years of following Boal’s map, Boal’s son, Julian, started coming to NYC, sharing his philosophy about organizing solidarity through identifying systems of oppression first, then telling stories.  Maybe the story didn't need to be a real "I experienced this exact story" after all - maybe we could get at solidarity faster and more directly via brainstorming things that are pissing troupe members off and then building scenes from there, based on people's experience and based on where these oppressions hide within the various systems.

With my head full of thoughts and a redrawn and scribbled-over map, I started out to the LaGuardia Performing Arts Center in Long Island City to create a forum play.  Aside from the trek of traveling from Brooklyn via Harlem and via the Upper East Side (Hey everyone! If you use the SUBWAY from the Ali Forney Center in Harlem to get to a Clown Class on the Upper East Side - you should get done with that class within TWO HOURS of when you started traveling to that gig. Then, get on a BUS and you'll get a free transfer!).   In addition to the public transport Tetris, there were some special challenges about making a play at LPAC. The first was making it clear to these LPAC acting majors that there wasn't going to be any 'acting' in the sense of pretending to be other people.  Boal addressed this tricky concept (and inspired people who were afraid to take to the stage) by saying “I think anyone can do theater. Even actors. And theater can be done everywhere. Even in a theater.” Also,  when we facilitate the creation of a forum play, we don't know what stories are going to come out. At LPAC, however, we had beenasked to make a play about Gender Identity in Muslim Culture.   This wasn't the problem: the students had all been warned of this in the course description. The problem? At the beginning we didn't have any Muslim students.  Ethically, I had to be transparent with the actors about this constraint.  I told them we’d keep "Muslim identity" on "the shelf" and that we'd start with the experience of gender oppression as an anchor:  everyone, I wagered would surely have stories of times that they had been expected to conform to a narrow vision of what it means to be a "boy" or a "girl," a "woman" or a "man."  More Muslim actors did show up, though, at the time for telling and picking stories (new members drop in midstream all the time in our theatre troupes - and I’ve learned to not let it derail the process - it’s amazing how quickly new members catch up).

The troupe now more complete, it was time to unearth the raw, ugly, embarrassing and angering stories of oppression using the following (what's the opposite of a treasure?) map: think of a time you needed something from someone, a someone who had the power to give these things to you, but because of who they perceived you to be, they didn't give it you - a story that ultimately ends in failure. One of the important features of these stories is that they not be "firing-squad" experiences - ones that we had absolutely no power to get out of (who would want to intervene onstage in a moment where they had to stare down the barrel of ten rifles?). I mention this feature because some of the stories that came up were definitely "firing-squad"; the protagonists in the stories were too young to be able to do anything to stop or change the antagonists.  This makes sense when exploring gender oppression, no? Gender is one of those constructs that is taught to us, very strongly, when we are very young.  Instead of scrapping these firing-squad stories, however, I overlaid Julian Boal’s method of finding stories onto the map. What were the oppressions that were driving these firing squad stories and where else in our collective experiences did we see them hiding?  "Manning-up" and "sexual harassment" became the (again, what is that thing that is the opposite of a treasure?) to search for.

As a facilitator, I headed off the edge of the map, altogether, with moments like this:  I'm sitting with one group that's brainstorming - and everyone's minds go blank. One of the actors' eyes light up with an idea and says "what if we had a scene where....."  As soon as they say this, I felt the unease of "maybe we're headed in the wrong direction - we're making up stories?? Isn't that super unethical?" But, as soon as I had had that thought, another person in the group chimed in with "that happens to me ALL THE TIME! Ugh! I HATE that that happens - it's so oppressive!"  Or moments like this: another group is sifting through media articles about the phenomenon of "manning up" (looking to the media is another tool of finding stories) - and they're having a hard time of finding parallels to their own experiences.  And then, for the first time, I break the "objectivity" of the Joker to chime in with my own “man-up” story.  I told them about the time when I was in college and called home to tell my family that I had decided to be a dance major. I was immediately met with resistance - “it wouldn’t lead to a real career” they said. “It was my patriotic duty...”  They didn’t say it at the time, but I believe that they saw it as an affront to my masculinity. I walk away to help another group, but within minutes, that small group is on their feet already and are re-creating my story, on stage, for all to see.  Instead of a phone call, they’ve awesomely staged it as an interrupted audition. Nobody knows it's my story, but nonetheless, I turn beet-red and I don’t know why. Maybe I’m beet-red because of the embarrassment of being oppressed or maybe my fight-or-flight, adrenalized mind rationalizes, “those actors performing my story know it's my story - and now THEY know that I'm not quite a ‘real’ man.”  A month later, audience members were getting up on stage to fight for acceptance for the person in that story - and it wasn’t my story anymore. I felt empowered that people wanted to get up on stage for my story.

As a straight presenting (but queer identified) white man, I’m used to feeling a certain amount of distance from the stories that emerge in the troupes that I facilitate.  Now that one of my stories was chosen, however, I’ve felt how dangerous and rewarding it is when a troupe comes together around my story and further, when audiences want to get up and fight in your/their story.  I’m certainly not going to try to get my story told by the actors in the troupes that I joker.  But I feel inspired to use all of these ways of finding stories to uncover what’s in the room/uncover the oppressions that happen in the world. And I feel activated that my own story emerged as a result of following that treasure map inward.  Thank you, LPAC actor/activists!