Make Sense Out of Nonsense 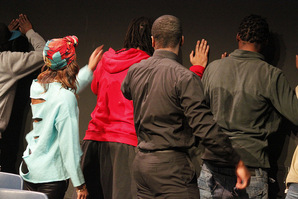 Inequality. Just how much do you think that affects the future of our society? They say you can only play with the cards you're dealt. If that’s truly the case then how would you react if not only you, but your whole family and most of your friends steadily received the bad hands? For clarity, I had a conversation with an N.Y.P.D correctional officer who has eight years experience in law enforcement (this person chose to remain anonymous), but I may have left with more questions than I intentionally had. I first asked her if anything has changed within the jail since she started working there and she replied, “Yeah, younger blacks and hispanics are coming in.” She also stated, “It has made me more aggressive because of the rough environment.” I would be lying if I said that comment didn't shock me a little. From what I know about her personally, she is a kind-hearted woman who wouldn’t hurt a fly. The fact that a rough environment can affect even her makes me shudder, when I imagine what it can do to a young child coming of age in a rough neighborhood. She says seeing all the slashing, fighting, and violence is what caused the change inside of her. Her message to the youth is: “stay out of trouble, it’s easy to get in and hard to get out.” She also said that she would like to see people learning from their experience and stop making the same mistakes.

The conversation with the Correctional Officer was very insightful, but it brought up more questions that I needed to get to the bottom of. Why is it so easy to get into trouble, but hard to do the right thing? Why can’t certain people learn from their mistakes? Why does it seem like this is only associated with certain people?  Why is it that the blacks and hispanics are the ones filling up our jail system? Is it because they are bad people? Is it because they don’t know any better? My first thought was inequality. The fact that resources aren’t as easily obtainable to blacks and hispanics as they are to caucasians can be a reason why crime rates are higher in the black and hispanic community. In order to prove my theory,  I interviewed two different  people from  two completely different walks of life: both are successful in their own way, and both have inspired me in some form to become a better person. The first is my teacher Jerald, a caucasian male from a small mountain town named Liberty in upstate New York. The second is my former supervisor and his name is John, an African-American male from Flatbush, Brooklyn. These interviews gave me a better insight on the workings of the world.

My first question to the two individuals was: did you feel much inequality growing up? I felt that was best to ask first because I thought everybody could relate to feeling the inequality gap. Jerald replied, “Not really; I was ignorant, I was in the middle-class, I was content, and my hometown is not too diverse.” Jonathan had this to say: “ No, everybody was mostly black. However there was a major difference between the rich and the poor classes.” Surprised by their answers, I then decided to ask them if they thought inequality is a major issue in society. John said, “Yes, because it doesn’t allow people to be seen as their better self. People can’t capitalize on their strengths and are being held down.” Jerald had this to say, “Yes, because it is vast. It creates an environment where a lot of people are happy, rich, and successful, yet their neighbors are poor. Some people enjoy great privilege, while others have no privileges. It’s arbitrary, one group isn’t different than the other. Powerful people are usually born with power.” My last question to the two was: what things would they like to see changed in this world. John said, “Respect among youth and their peers.” Jerald replied, “I would like to see more thoughtful people, people being reflective about who they are and how they got there. Too many people are delusional and we need to understand who we are.”

Intriguing isn’t it? Both were unaware about all of the inequalities going on around them for the most part because it was never brought to their attention; this proves that we are blinded as youth when it comes to our peers that have different ways of living.  When John said, “People can’t capitalize on their strengths and are being held down,” it made me think of all of the wasted talent that comes from a lot of young black males who can possibly be great poets or authors, but are too busy trying to become the next big mainstream rapper. Mainstream rappers are usually figures in black society who get overpaid by major record companies to send messages of hatred and negativity, which in turn makes the youth more cold and heartless. Jerald made a good point when he said, “One group isn’t different than the other, powerful people are usually born with power.” It makes me wonder if blacks and hispanics were raised in a more productive environment, will they still be forced to make poor decisions because of the lack of resources?

Overall, I learned a bunch of things, but I also figured out that I have a lot more learning to do. I will probably never get to the bottom of all the injustices inequality brings to society by myself, but talking about it with others who share my concern definitely gave me a better viewpoint. The way things are set up now, minorities living in poverty will always have a disadvantage when trying to make a better living for themselves. The only people who are able to escape this cruel fate unfortunately have to suffer from tired days from working hard all night, and loneliness because none of their peers can understand them. (I often find myself going through this.) Some even suffer from depression and become cold and bitter to everyone around them. Times are changing, which means old ideas die out, and new ones blossom. I have faith in a future where there is less inequality and more understanding in people’s actions against one another. Will that age ever come in my lifetime? Will it ever come at all? If it does come, will more problems within society sprout as well? We’ll just have to wait and see what happens.