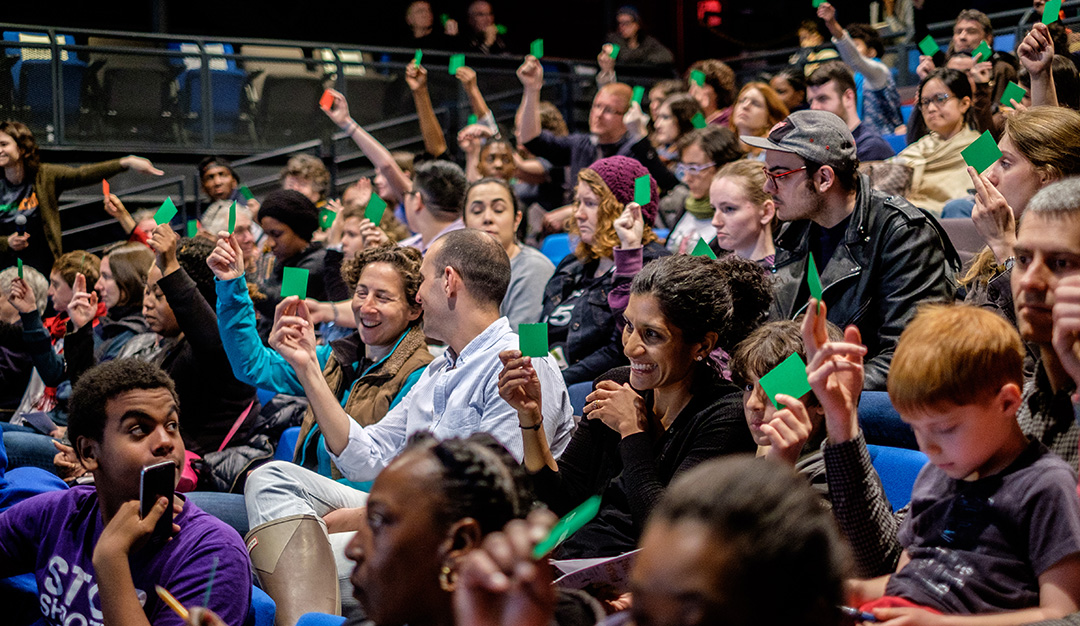 "Law is seen as an expression of someone’s desire. At present, it expresses the desire of the powerful – but it can also express the desires of the people." - Augusto Boal

As TONYC as an organization has grown, Legislative Theatre has grown with it. Unable to exist in a vacuum, the work is influenced and impacted by the organization’s capacity, by the panelists, the audience, the actors, and current events. Given the present political climate, Legislative Theatre and the arts as an agent for change are vital tools for educating constituents, empowering and engaging individuals, challenging the status quo, and altering policy for the better. Read the full report here.

The event and the discussion

Our Housing Works Theatre Troupe performed their show Apartment Complex, about tenants dealing with a landlord who was using all the illegal means necessary to remove them so she could raise the value of her inherited property. Our protagonists Bill and Bebe struggle with a devious landlord who uses manipulation, discrimination, and harassment to get them out.

After the show, we broke out into three groups to contend with the main themes of the show: Tenant Support, Landlord Harassment, and Voucher Discrimination.

Ideas proposed at the Breakouts

After gathering back together, we heard the following proposals from the breakout groups.

In order to provide transparency about landlord quality, we propose to create a landlord rating system public online, accessible as Carfax or Yelp, then the Landlord has to show grade from website publicly like restaurant ratings from DOH.

In order to hold landlords accountable, we propose to have a land property audit that has enforced consequences like jail time, fines and public shaming.

In order to prevent voucher discrimination, we propose housing assistance to align with standard tenant/lease norms — pay monthly, landlord doesn’t have to know who pays.

Nathalie Interiano, Policy and Advocacy Associate, Care for the Homeless

As we went through the proposals, our Policy Rangers addressed what’s currently underway in terms of policy, ways to continue to make these changes viable, and actions that individuals can take. The audience voted to take action on every proposal.

There is energy around these proposals. The very next day after the event, we were excited to see that City Council passed the "Certificate of No Harassment" legislation aimed at preventing the type of landlord harassment highlighted by the Housing Works troupe in the play. Under the new law, building owners who want to demolish or make alterations to their buildings within the identified areas, will have to prove that they haven’t harassed tenants before they can get permits from the city’s Department of Buildings. Full text of the legislation is here.

How does legislative theatre work?

WATCH original plays based on the actors’ lived experiences.

ACT on stage to brainstorm alternatives to the problems presented. Jokers open the stage to Spect-actors to rehearse new ideas. Everyone writes their ideas on notecards that are processed and sorted by the Policy Advisory Team.

One hour before a Legislative Theatre show, audience members meet with community partners and activists to get prepared to engage on the issues being presented.