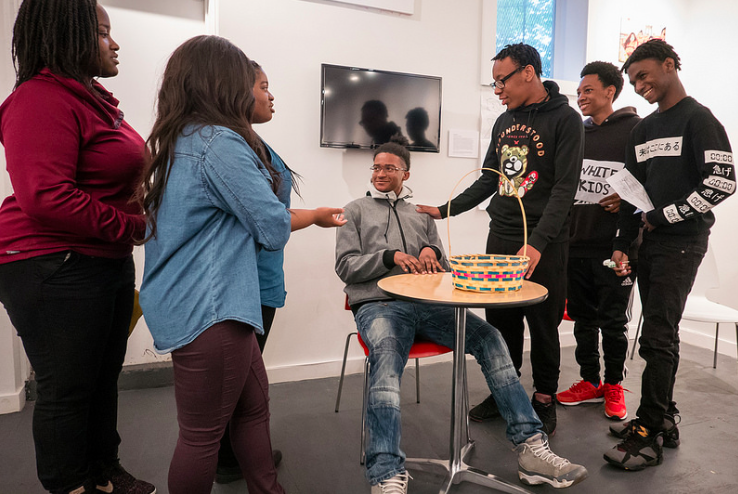 Make creative policy change with a performance by the Crown Heights Community Mediation Center Troupe, a group made up of youth from Brooklyn who are affected by gun violence and school to prison pipeline- they address these issues in their work. At 1pm, join us for an Advocacy Fair with community partners and activists. At 2pm, watch original plays based on actors’ lived experiences, act onstage to brainstorm alternatives via community action and public policy, vote with representatives from City Council, the Mayor’s Office and other elected officials to carry these ideas forward, and get activated with post-show breakouts and brainstorms! This event is wheelchair accessible.

This play tells the story of young people attending a party in Crown Heights where there's a gang-related shooting; later, one of the party guests, a high school student, is killed by a gang member for witnessing the first shooting. His classmates find out about his death on the news (via a racist news report) and come into school the next day grieving; their teacher does not show any support, threatens them with detention or suspension if they talk about the shooting, etc; which leads to students getting into trouble in the school for trying to mourn his death. 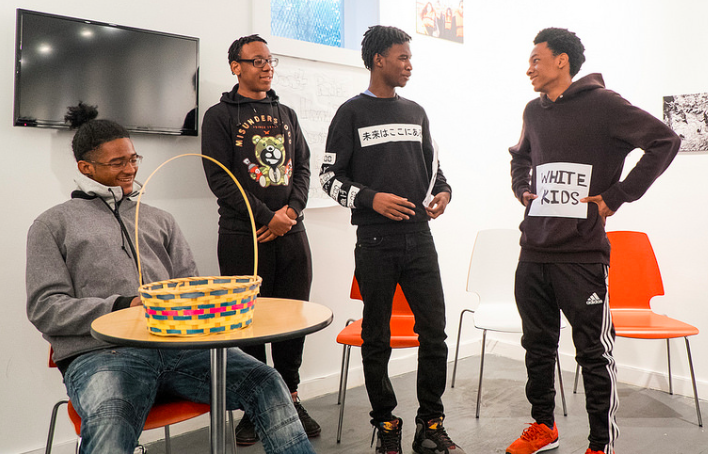 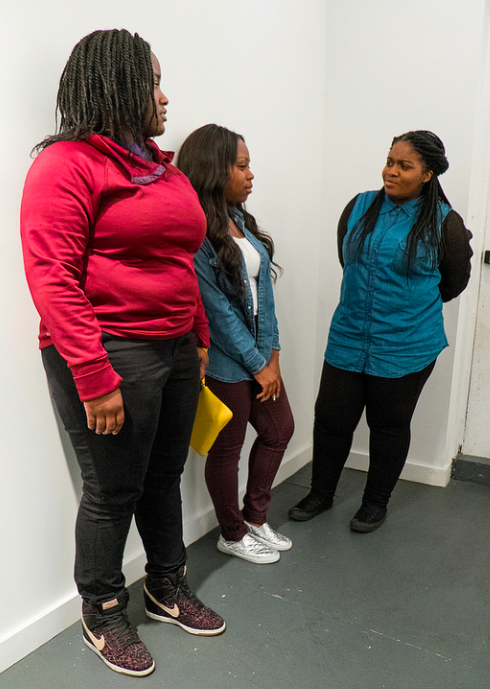 We’re so excited to team up with BRIC House to host this event. BRIC presents programs in contemporary art, performing arts, and video that reflect the creativity and diversity of Brooklyn, and advances and nurtures emerging voices and works-in-progress by local artists and media makers. We’re so glad to be partnering with BRIC for this event!

Our troupe partner organization, the Crown Heights Community Mediation Center Troupe, is a unique neighborhood institution that works to improve community problem-solving, collaboration, and inter-group relations in Brooklyn, New York. The Mediation Center staff and volunteers work to strengthen the neighborhoods of Crown Heights and Bedford-Stuyvesant. They are an example to the city and the rest of the world of how neighborhoods torn apart by violence can become safe, healthy, and vibrant places for all people through the collaborative efforts of neighbors, government, and community organizations. At their Crown Heights office, they offer resources, referrals, and youth programs, and in the community, they run youth development and anti-violence programs. The Crown Heights Community Mediation Center is a project of the Center for Court Innovation.

For our Advocacy Fair one hour before the performance, we’ll have representatives from Advocates for Children of NY, the Mayor’s Office Of Immigrant Affairs, Covenant House, and New York Civil Liberties Union join us for tabling.

To help us bring our policy ideas to life, we’ll be joined by policy advisors Dawn Yuster from Advocates for Children of NY, Erin George from JustLeadership USA, Amy Ellenbogen, director of Crown Heights Mediation Center, and Elizabeth Olsson of the NAACP Legal Defense and Educational Fund.

Dawn Yuster is the Director of AFC’s School Justice Project(“SJP”), which provides advice and free legal representation directly to families with students situated along the spectrum of the school-to-prison pipeline.   Dawn also oversees SJP’s community education and systemic reform work, including advocating for positive approaches to discipline that maintain safety while improving school climate, increasing learning, and reducing the overreliance on exclusionary discipline practices such as suspensions, arrests, summonses, and unnecessary removals by Emergency Medical Services.  She is class counsel in J.G. v Mills, which brought claims involving the failure by the New York City Department of Education to provide appropriate educational services to students with disabilities in, and upon their return from, certain court-ordered settings.  Prior to joining AFC, Dawn was an attorney at the American Civil Liberties Union and the New York Civil Liberties Union, a public defender at the Legal Aid Society, and First Deputy Director of the New York City Department of Consumer Affairs’ Research and Investigation’s Legal Unit.

Erin George is the Advocacy Coordinator at JustLeadershipUSA, working on the campaign to #CLOSErikers and other initiatives to cut mass incarceration in half by 2030. Erin has spent the last several years working on campaigns to reform drug policies, criminal justice, and environmental injustice in New York at both the state and city level. Erin is committed to a grassroots model of change, where individuals who are directly impacted are the driving force behind the movement as well as the development of solutions.

Amy Ellenbogen has been the director of the Crown Heights Community Mediation Center since 2002, developing and implementing programs as well as overseeing day-to-day operations. Amy has run community and school-based programming on topics as diverse as violence prevention, adult and youth leadership development, family and community mediation, truancy prevention, intergroup relationship building, pregnancy prevention, and race and identity. Amy planned and directed the first New York State Cure Violence replication site, Save Our Streets Crown Heights, an anti-gun violence program that uses a public health approach. Currently, Amy is part of the planning team developing culturally competent trauma informed programming for young men of color and Save Our Streets Bed-Stuy. Amy is the founder of ROOTED (Respecting Ourselves and Others Through Education), a Columbia University program designed to facilitate student dialogue around issues of identity as they relate to power and privilege. Amy received both her BA in Ethnic Studies and her Masters of Science in Social Work from Columbia University. She is a Licensed Master Social Worker and a mediator.

Elizabeth Olsson serves as Senior Policy Associate at the NAACP LDF, where she identifies, develops and advances legislative and policy reforms in LDF’s priority areas, with a special concentration on education equity.  Ms. Olsson partners with federal and state-based coalitions, including the Dignity in Schools Campaign, to ensure the fair and effective implementation of the Elementary and Secondary Education Act of 1965, as amended by the Every Students Succeeds Act of 2015. Previously, Elizabeth was Manager of Policy and Advocacy for Internationals Network for Public Schools, where she was responsible for leading advocacy initiatives to promote educational equity for immigrant English language learners. While there, she lead an effort to secure additional public funding for schools serving significant numbers of unaccompanied minor students in New York City, which resulted in a $1.1 million grant program for these schools.Prior to her work with Internationals Network, Elizabeth served as the Policy Coordinator for ExpandED Schools. While there, she advocated for legislative and policy reforms to improve access to high-quality educational opportunities for low-income students of color. She also served as Elementary After-School Program Manager for Harlem Children’s Zone and previously worked as a middle school English teacher. Elizabeth is a graduate of the New York University Robert F. Wagner Graduate School of Public Service and Pace University School of Education.

Stay tuned for more information, and we can’t wait to #WatchActVote with you next month!