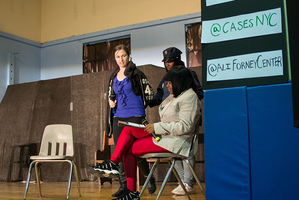 "The show must go on." That is what another guy and I said to try and keep everyone's spirits up, even though there was no main actor. Unfortunately, not everyone was as excited about continuing the play as we were. I was told that I would be the replacement for the main actor, leaving all of my other roles to others who were not as prepared. We tried to rehearse our new roles, but it didn't have the same feeling. The situation was now disastrous; the actors didn't want to perform anymore and the morale was at an all-time low.

It was finally time to perform. A fellow actor approached me to explain how he didn't think he was ready, he didn't exactly know what to do in his role, and he didn't want to participate. We were already short actors; and Katy Rubin, the artistic director of TONYC, began talking to the audience, indicating that the show would start soon.

We couldn't afford to let anyone drop out of the play this late, so I decided to help my friend rehearse his role. We were in front of the black box theatre at John Jay College, and we managed to attract a few onlookers. I was afraid that would only add to my friends’ nervousness; but it did the opposite, and he started to feel more confident in himself. That was one problem out of the way, but I was still afraid that I wouldn't be able to perform my new roles that well.

My heart was racing out of my chest, and my confidence was starting to fade. Can I really do this? I started to prep myself for the performance when we received a call stating that the actor whose role I was filling was on the way. I felt a wave of relief rush upon me; but our troubles weren't over just yet.

A few minutes later, and he finally arrives! The seating was filled to the maximum capacity; it would’ve been a fire hazard had just one more person been in the theatre.  We no longer had casting  problems, Katy finished her speech, and the play went on. If I said the whole thing was a success, and nothing went wrong, I would be lying. Not to say the performance was bad, but it wasn't on par with the one at the Afrikan Poetry Theatre due to the fact that we didn’t get a proper rehearsal. Luckily for us, this was a brand new crowd who has never seen the first performance. The crowd  seemed ecstatic, and they congratulated us after the play. People from completely different walks of life approached us and told us that they acknowledged our performance, and that they themselves have gone through similar difficulties. The storm had finally passed, or so I thought.

We were now on our last phase in QJC, the internship phase. I knew that I would have to become an intern for a company of my choosing, and I thought who else but TONYC, they have helped me raise my self-confidence by recognizing my talents, and putting them on display for others to recognize. I talked with Katy, and she seemed just as excited about it as me. I was now their “Writer in Residence,” and I also had another important role to fulfill. I had to help facilitate the next group of young people that was a part of QJC, cohort six, to create their own play based off of their experiences when the time came. “This can’t be too hard,” I thought to myself. I’m already good at writing, and I now had experience in creating a play with a group to perform in front of a crowd of strangers.

The beginning was smooth. Together with TONYC, I traveled to a couple of different places unknown to me and I had a chance to write about the experiences. My first piece was about meeting an Oscar-winning actress named Olympia Dukakis. Our time with Ms. Dukakis was amazing, and it inspired me even more to pursue my newfound love of acting. I continued to write more blogs, and they didn’t become easier as I initially thought. Each blog became more challenging, forcing me to step up as a writer to complete the tasks given to me.

It was finally time for cohort six to start the process of creating their play, and not too many of them seemed excited about the whole thing. We held rehearsal every Tuesday and Thursday, but there would be a different set of people showing up almost every time. It eventually got to the point where it would be a new play each rehearsal.

This play in particular was going to be a part of a bigger festival that TONYC hosts annually. The festival would consist of three different groups of people; each performing a scene from their own plays, and there would be elected officials showing up. Weeks pass, and it is now time for the festival to begin. I had no intention of being in the play. Instead, I wanted the other members of cohort six to enjoy their own unique experience, but the day of their first performance only three members showed up. The scene they were about to perform didn’t require much, but for only three members to come placed a huge strain on the group’s morale. This situation felt like a repeat of John Jay, only this time nobody seemed hopeful, and nobody wanted to participate. There was only one more role that needed to be filled, in which I stepped up to participate. It still didn’t feel right, but we did the performance. It was successful, and it left the group feeling hopeful. They promised to pressure their peers to come for the second performance.

It was now the day to perform their scene for the second time, but instead of three people showing up, there were five. It wasn’t much, but it was enough to perform their scene in which they did successfully. After the event, everybody was excited. Tenaja and all of the other staff from QJC joined cohort six on stage while everybody took pictures to commemorate the situation.

How did they know I was going to take the program seriously? Well there was no sure way of knowing at the time, but I chose to speak with my actions. I completed the  Queens Justice Corps program, and my internship with TONYC was ending as well. I have been through a lot of ups and downs these past six months, but my goal has always remained, be the best you can be. I thought it was over, but it was just the beginning. The staff at TONYC said that I can continue to be their writer, and that there were many new ventures for us to explore. I will continue to write about them as I go through this shaky road we call life, and I hope the readers will continue to enjoy it as much as I do.