Forum Theatre to Know Your Rights 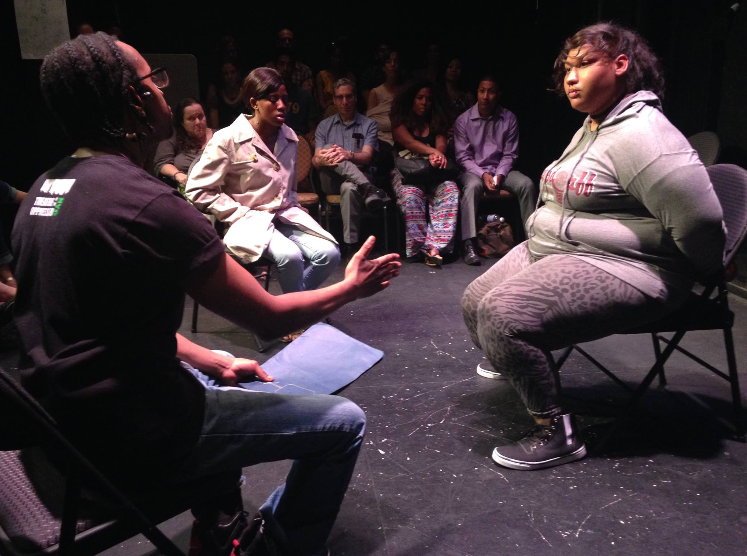 “Who thinks they can arrange these three chairs as though one has more power than the other two?”

A simplified version of Augusto Boal’s Great Game of Power*, this is our segue into the core activity in a new workshop we’re developing with our friend David Miranda, Senior Staff Attorney at the Peter Cicchino Youth Project at the Urban Justice Center and dedicated advocate for homeless and street-involved young people in New York City.

From sculptures using the three chairs, we start to generate stories and eventually bring them to life in short improvised scenes about encounters with the police - a conversation, a detention, and an interrogation.

In one scene last week at Covenant House New York, a young person playing a police officer pulled out a bottle of Axe body spray in order to “pepper spray” his peer playing the suspect (slightly avoiding his face for the purposes of the scene). “Because that’s what they do! They did it to me!” he explained once the scene was over and he could break character. The now-scented room of young people concurred - sometimes cops do that.

Once we’ve established the reality and have seen what kinds of oppression are enacted during police encounters, we turn each scene into Forum Theatre. “Who has another idea? What else might this “suspect” character try?” For the purposes of this workshop, we’re also asking “What are this character’s legal rights?”

David chimes in with anecdotes and advice from his years defending clients in New York City. “I met with a young person last week who told me the cops promised there would be no charges if he complied with what they were asking. Well, the fact that we’re meeting means there are charges. The police officers are trained to close the case - and sometimes that means they lie. No matter how much you think they have against you, you want to talk to your lawyer first”.

The goals of this forum - like any forum theatre piece - are to rehearse tactics against real-life oppression, critically analyze how each tactic plays out, and creatively share ideas as a community. David’s goals as a Know Your Rights trainer are to cover the key information about the criminal justice system that gives young people more power to stand up for themselves. In marrying these goals, we’re not only making the facts fun and engaging but also applying the experiences and wisdom of everyone in the room towards real-life change.

*as described in Games for Actors and Non-Actors
___

Becca Lynch, Joker and Founding Member, has been practicing Theatre of the Oppressed since 2007, with TONYC since 2011. In New York City and in Los Angeles she has worked with youth, people with experiences of homelessness, LGBTQ groups, and immigrant communities to create Forum and Legislative Theatre. Internationally, she trained with Jana Sanskriti in Kolkata, India, and Amani People’s Theatre in Nairobi, Kenya. She holds a BA in Theatre and Psychology from the University of Southern California.