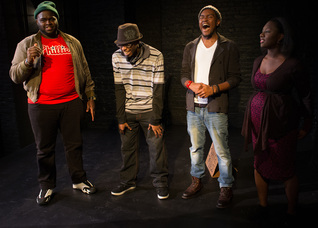 “These stories we’re telling, are our stories.  Real stories, it’s the shit we have to put up with”.

She arrives an hour and a half late to rehearsal dragging a large suitcase she can barely lift. She looks like an extra for Erykah Badu’s “Bag Lady” video. I pick up her suitcase and struggle to carry it up three flights of stairs. How in the world has she managed all day with this thing?

“How was your day?” She shoots me a look that explains it all. She walks into the rehearsal room and instantly the atmosphere brightens.  You would never know it by looking at her but she’s transient homeless.

Though she is the only one shouldering luggage today, she’s not alone in having to cart around baggage. This is not an ordinary group of actors. The entire troupe is made up of homeless young adults carting baggage that comes with the constructed reality of being a minority, or being queer, or just being poor. The weight of the bag she is carrying today is no different than the metaphorical but also very tangible weight that all of the actors face on a daily basis.  She tells me she is tired - it’s obvious that she was rushing to get to rehearsal. I wonder, in addition to all of the real life drama she is faced with every day, why is it so important for her to make it to a play rehearsal every Thursday night?

Every week before we begin rehearsal there is an unofficial check in, time to just be present to bring our awareness in the room. While I’m waiting for rehearsal to begin, which is normally 30 minutes after the scheduled time, I make it a point to ask everyone how their week has been.  Everyone is facing vastly different obstacles but the answer is always some derivation of struggle. Each conversation brings me back to the same contemplations. Why? What makes a Thursday night play rehearsal so important to this group of economically and socially oppressed people?

I know why it’s important to me. I spend most of my time working with professional actors, and most of the rooms I work in I am the only person of color - so Thursday nights are special. It’s a time when I get to be myself: all of the pretenses and need to code-switch fall away. There is community in rehearsal on Thursday nights like nothing I’ve experienced in my professional work. A sense of belonging.  There is room to be human, to be vulnerable, and to be flawed - which is necessary for the work since the stories that are shared are personal struggles the actors have encountered.
Thursday nights are a time for everyone to dump the contents of their baggage out onto the floor. To talk about the crippling systemic issues in a way that makes everyone vulnerable. Every Thursday the actors reveal something deeply personal that raises the stakes of the story that we are creating together. In these moments I realize that there is more to the weight of the baggage that these actors carry: tenacity, innovation, resilience, compassion not only for the oppressed but for their oppressors - these are other items they carry with them.  It takes courage to bear your soul, to expose yourself, your needs, fears and wants. It takes an incredible amount of fortitude to share your story with a room full of strangers and to allow people who may or may not have the hard earned life experience that you have to reenact your struggles.

This exchange of life experiences creates a channel of understanding and connection across social, economic, and cultural barriers - it's powerful stuff. The spoken truth will always terrify those whose privilege and power is contingent upon debasement and disillusionment. This makes the forum plays that TONYC creates highly dangerous. For certain this is why Augusto Boal was arrested and persecuted by the Brazilian government in 1964.  However, the forum play is not just dangerous for the privileged members of our society, it is also perilous for the courageous actors who face the possibility of being essentialized, stereotyped, humored, exploited or worse. If the play is executed incorrectly the performers run the risk of reifying the very ideological systems of thought that they are seeking to dismantle.

Agency is the only way to ensure that this does not occur. Agency in the creation and execution of these narratives is paramount to the work that TONYC does. The performances create an experience for the spectator that challenges them to empathize with the protagonist, in doing this a bridge of understanding is built. This bridge does not rectify the problem or eradicate the issue but it does connect everyone involved and creates the solidarity that is necessary to create reform. It does not give the actors involved a voice: that’s something we are all born with; but it does give them a safe place to collectively scream and a platform to scream upon.