A Personal Insight into the Art of Acting with Ms. Olympia Dukakis 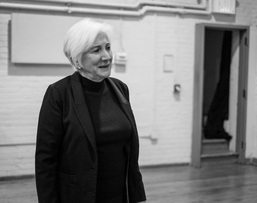 by Travis Stevens, Theatre of the Oppressed NYC Intern.

This past Thursday, Theatre of the Oppressed NYC and some of their associates had a very informative session with Academy Award-winning actress Olympia Dukakis. Ms. Dukakis is famous for her dazzling performance in the 1987 movie “Moonstruck.” We met up at Judson Memorial Church in Manhattan, and there was a variety of actors in high hopes of receiving  expert guidance. The actors were from organizations that are trying to bring awareness to issues like homelessness, joblessness, living with HIV, and being in the LGBT community. Ms. Dukakis was giving tips on different scenes that the actors were working on, all pertaining to those issues.

It was a personal insight into the art of acting; she said that acting is not only a performance, but an experience. She noticed that the actors were trying to connect to the audience. In order to do that she said to always watch the audience members’ facial expressions, and that it’s impossible to connect to them without knowing the reason that you’re on stage. As the actors performed their scenes, she asked questions like “What were they watching on T.V.?” or “How old was the toddler?” These were seemingly meaningless questions to an outsider, but she explained by saying “The thoughts make the feelings happen.” She also said to not lose sight of your personal morals while on stage. Our mission in performing the plays is to raise awareness and try to initiate change. If we forget about all these things while performing then the show won’t be believable or authentic.

As things went on she continuously paused the scenes to ask more questions. At first the questions caused confusion; but it actually ended up teaching me a lesson not only as an actor, but as a writer as well. She asked us, “what is the difference between plot and story?” When she first posed the question I thought I already knew the difference. I mean I’m a writer, this is what I do, but nobody, not even myself, gave Ms. Dukakis a sufficient answer. She told us that the plot is all of the objectives within the story, not just a single objective. The story is the much broader vision, it’s the reason why the character acts the way they do, their backstory. I realized this as she was coaching one of the scenes. The scene was about a homosexual man disclosing his HIV+ information to his downlow lover. She said that “each person is the center of the play,” meaning each person had to maneuver a certain way. One of the guys was a drug addict, but he wasn’t acting very fidgety or showing any behavior that he was addicted. When everybody in the scene took Ms. Dukakis’ advice, the scene looked brand new and was much more impactful.

Ms. Dukakis taught us a lot of essential techniques, but I can’t help but think our session ended too early. I wanted to know a few more things, like other strategies to make the story more believable, or different ways a person can still be useful to the scene while not being the center of attention. Overall, I learned that when acting, you have to slow down and take the story piece by piece to make it believable. Your job as an actor is to figure out what the scene needs to work, and you have to show all of the faces of the character. Olympia Dukakis made me see that acting is much more complicated than it appears, but it’s an enjoyable thing to experience, both on the stage and in the audience.