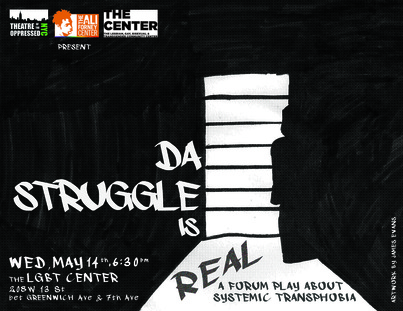 Today's rehearsal at the Ali Forney Center (which provides services to lesbian, gay, bisexual, transgender, questioning [LGBTQ] youth with experience of homelessness) starts out as many have before...

...Me sitting, by myself, looking at the clock. This time though, I'm marveling at how relaxed I am - considering how stressed I was in the past when no one showed up for rehearsal. I've come to realize that the actors' lives are unpredictable - their schedules colonized by case workers, housing issues, public housing interviews, cops. Making political theatre, though a priority for them, can take a back seat to making sure they have housing, getting through to their job readiness programs or having their work schedules changed on them.

Five minutes in, the first actor shows up: he's the troupe's “regular” - the fact that we're the only two ones there doesn't surprise him either – he's been with the troupe through long stretches of no-shows. Two minutes later the troupe's Joker-in-Training (facilitator in training, and JiT for short) runs in, panting. The regular and I joke about how surprised and hurried the Joker-in-Training's face looks. He'd rushed on the bus - having gotten a late start leaving his family in the morning. We tell the JiT about the time that the regular had to make some videos (he says this with disdain) because no one was showing up to rehearsals.

Then, a little of the “how are we going to get this done” familiar play-making stress surfaces inside of me – to which I reply "just make this rehearsal count.” Because we never know who is going to show up/disappear (actors get called away to go talk to their case managers all the time) and because we have clients from AFC drop in and out of the process so unpredictably – I have learned to take away the endgaming stress of “making a play.” Each rehearsal, I tell myself, has to be a full experience: beginning, middle, end. Each rehearsal has to foster a feeling of solidarity so the actors can feel comfortable to tell their stories of oppression. Each rehearsal has to be a way of uncovering and examining habitualized and systemic oppressions/oppressors that keep us from actualizing our human rights. Each rehearsal must become a rehearsal for undoing that system of oppression – brainstorming actual tools, for use out there, when rehearsal is done. All this, whether someone comes for one day, one ten week session or, as this regular has, for three years. It's a tall order and with us three (all T.O. Regulars) present at rehearsal, what do we talk about? The weather.

Twenty minutes later, two more actors show up. And because rehearsal is so relaxed and “not concerned with the end final product of the play,” we talk, no – they talk about anime. I know nothing about anime. All I know is that they're Japanese animated cartoons. My brain, which had become softened by talking about the weather fills with images of people getting their heads chopped off, little robotic balls that digitally print copies of dead people, things that I have never seen in a cartoon- nor would want to – but this is something I do as a facilitator. I let the conversation go where it may and then try to segue into the work. I use this approach as a way to see where the actors are, to give the rehearsal a feeling of not-school, and then, I use a slick segue (or what I think is a slick segue- they all usually see right through it) as a way of tricking people into talking about oppression (nobody walks around with their oppressions on their sleeves!). Today, however, starting as late as we have and having fallen as far down the anime rabbit hole, I can't see the way out.

Then, one of the actors starts describing a voice over introduction to one of the movies. She's acting super dramatic, moralistic and full of serious fantasy. Wait a minute! I think, last week this group of young trans people had connected over their stories of oppression. This week we've got anime. The plan (which had been to make sculptures, 2D art and spoken word out of their stories) is out the window. I inform them (no segue at all) that they “have ten minutes to do two things: 1. remember the stories from last week and decide which one they feel is most pressing, the one they feel most angry about 2. to figure out an intro to their story in that hyper-dramatic anime style (shameless segue) & 3. do the beginning – just the beginning of the story.” We, the JiT and I, will be outside.” They have a request, to which I answer “yes, we can get you a cup of hot water and tea and four splenda packets.”

Ten minutes later they're inviting us in, taking imaginary tickets and telling us to enjoy the show. They've written a short intro and then ad lib 90% of the play. In case you didn't read that right: I told them to make an intro (intended as a way for them to outline one of the stories) and then just do the beginning of one of the stories – and they've taken all of their stories and written/woven them together into one play (often the hardest part is finding the parallels and overlaps between the scenes), in TEN MINUTES. And the play is funny and it's heart-breaking and most surprising of all, it's pretty much done. This process never ceases to surprise me. Finishing up we talk about the systemic transphobia that makes it ok to fire or not hire trans people because they make us uncomfortable - we talk about domestic violence and how the cops aren't really there to protect us from violence just to arrest us – we talk about how young kids are often more fluid with gender and less judgmental – Once we wrap up rehearsal with a game, they complete it: they segue me back into the real world by giving me a few anime titles that I've got to watch.

Catch our amazing public showing of Da Struggle is REAL at The LGBT Center, on May 14th 2014, 6:30pm! 208 West 13th St, NY, NY. Can't make it on the 14th? The troupe is also performing at TONYC's 2nd Annual Legislative Theatre Festival - reserve your free seattoday!