A journey of a thousand miles 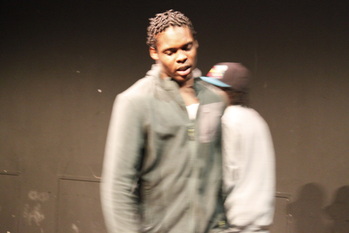 By Travis Stevens. This entry is part of a series in preparation for our 2014 Legislative Theatre Festival.

My name is Travis Stevens, and I am a lover of the arts, especially when it involves helping others or bringing awareness to something in need. I am a student at the Queens Justice Corps (QJC) and am also the new intern for Theatre of the Oppressed NYC (TONYC), whose interests are similar to my own. It has been a long and hard journey for me to have made it to the point where I’m at right now. The reason being is because I was raised believing that society was problem-free, and that people willingly help others that are in need. I quickly realized that was a false reality because of the fact that nobody seemed to want to help me through my problems while growing up, most people didn’t even care about the matters that doesn’t concern them. I learned that in order to get what you want in this world, you must take it, which at first I took out of context. I started rapping with hopes that I will get famous and won’t have to worry about the daily struggles that come with being black and living in poverty. I was never able to freestyle, meaning rap from the top of my head, I always wrote my raps and my peers would always tell me I was talented. I started to become less concerned about others, since that’s what was happening to me; and with my “take what you want” mind frame, I was arrested with multiple charges including burglary. While incarcerated I was furious, and placed the blame on everybody but myself. I had a lot of questions, but the most prominent question I wondered about was “why couldn’t I have been born in a rich society where I wouldn’t be forced to make poor decisions?”

They say everything happens for a reason. While in jail, I was inspired by a friend to write a cartoon. It was then that I realized that my passion wasn’t for rapping, but for writing. When I was released I was dedicated on getting my cartoon shown to the masses which I put all my effort into, but I made little to no progress. I may have had a bunch of failures, but I learned from every one of my past experiences. In regards to my cartoon, I learned that nobody is willing to accept material from an amateur with no connections within the industry. I believe the reason is because as an amateur, they would feel like my writing skills aren’t up to par. I decided to try and produce my cartoon on my own. In order to do that I must hone my writing skills by writing other pieces, and saving enough money until I can actually get something started.

I was told about the Queens Justice Corps through my uncle, who has a friend that works there. The Justice Corps is an organization dedicated to helping young adults ages eighteen through twenty-four that has had some type of trouble with the law in their lifetime. QJC assists us in achieving our personal goals, no matter if the goals range from simply obtaining your G.E.D or going to school to become a doctor. With promises to help you achieve your dreams, and get paid while doing it who would turn down an offer like that.

I was introduced to TONYC through the Justice Corps. My “cohort” constructed a play based on our experiences with the law. We called the play “Can’t Get Right;” and we performed it twice. The first was inside the Afrikan Poetry Theatre which the cohort helped reconstruct, and the grand finale was in a packed theatre inside John Jay College of Criminal Justice. I’ve never done anything pertaining to acting before that experience, yet we had a swell performance, and we all had fun doing it. I liked the fact that we were shining light on some of society’s issues; and that we connected with others who we at first thought we had nothing in common with, but then realized they are facing or have gone through similar issues throughout their lifetime.

I’m glad to be a part of TONYC because their mission is to incite change, and to be apart of this experience is amazing on its own. I hope to one day be a role model to mine and future generations so I can have the influence to move the masses and end the cycle of hopelessness and hatred for a better future. As I progress in my journey I see more and more problems within society each day. One of society’s biggest downfalls that I see everyday and needs more awareness is racism. Racism is a major problem that no one seems to acknowledge; probably because people don’t think it’s that severe, but it’s holding us back as a nation. There are countless other problems within society, like the inequality between the different classes, and other forms of mental oppression within the black community. All of these are problems that can’t be solved by one person; but I believe that through everybody’s efforts combined, we can change the world even if only a little.