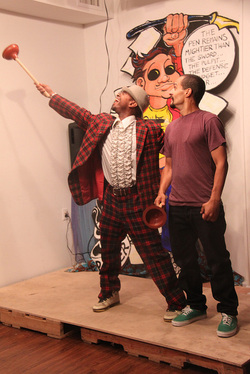 (l to r) Moon and Mike performing at LaunchPad

Tuesday, September 17, 2013, 5:00 PM. Franklin Avenue, Crown Heights.
I’m waiting with the actors of Concrete Justice on the sidewalk in front of LaunchPad Brooklyn for the man with the keys to arrive. Ignoring the occasional surge of commuters from the nearby 2-3-4-5 station, we snack, and we rehearse.

I’ve been working with Concrete Justice as a Joker-in-Training since the fall of 2012. Tonight at LaunchPad, we kick off our fall tour of The Housing Circus, the troupe’s fourth original play in three years.

The Housing Circus takes place at a decrepit transitional housing facility, depicted in the style of a circus. One resident, Sidney, decides to leave the facility for the day to find a job—but by leaving, he “fails to comply” with the terms of his housing. Another character, Mike, having languished in a city shelter for six months, is now assigned to Sidney’s bed.

Mike and Moon, the two actors who have been with Concrete Justice since the very beginning, are drilling their big song-and-dance number from the climax of the play, right on Franklin Avenue. Moon plays the Ringmaster: the facility’s boss and the show’s emcee. He tries to distract his new client from the horrifying conditions with a song and a smile, but Mike’s not buying it.

I’m the outside eyes of this impromptu rehearsal, but I turn and look south for a moment and I see Doug walking our way. I haven’t seen or spoken to Doug in six years, but I’m sure it’s him: he looks the same, plus a patchy beard. But I’m not in the mood for a blast from the past, so I shut down my peripherals and focus on the plunger-twirling actors. I take a long breath, hoping the ghost will be gone.