“Blame the Next,” a Game from Staten Island

By Sophie Nimmannit. This entry is part of a series in preparation for our 2014 Legislative Theatre Festival.

This is a great thing for me to hear an actor say in rehearsal. It means that actor needs the scene we’re acting to become real. Like, really real. They step in and make a change. Everyone bursts out laughing, because they instantly recognize reality, and it is so much better than the version we had a moment ago. That’s real. Sometimes there’s a quieter response - murmurs, damn, silence - when reality sucks. These are important milestones in rehearsal, because I see everyone become more invested in the scene, and because we want to show reality. Many actors are surprised that we’re asking to see What Really Happens; they expect plays follow certain structures, like Disney endings, or stories of triumph over adversity. Or they think they have to be nice.

Last fall, an actor made an edit - not to a scene - but to one of our rehearsal games. The Justice Community Plus troupe was rehearsing It Be Like That at the Staten Island Youth Justice Center. I had suggested that we play a game called “Yes, But.” Typically we play this game to prepare actors to play antagonists, aka Oppressors, as they need to be ready to improvise confrontations with spect-actors from the audience. 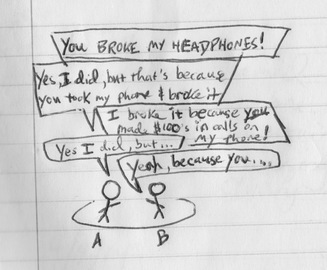 
Here’s how it works:

In Yes, But two actors face off in a battle of accusations.

A accuses B of doing something to them.

B admits to the act, and accuses A of doing something to them earlier.

At this rehearsal, as I proposed playing “Yes, But”, I threw in a little reference to “reality”. I tried to justify playing the game by saying, “these characters might respond to their accusers by throwing blame back, doesn’t this happen in reality?” But Michael, one of the actors said, “What if they blame someone else? What if they accuse the next person? ” And this is the variation of “Yes, But” that developed.

In Blame the Next, instead of two people facing off, actors suggested that the entire group play and send the accusations around the circle. In this version, W accuses X. X admits their guilt, but says they did it because of something Y did to them, then Y accuses Z (see illustration below). 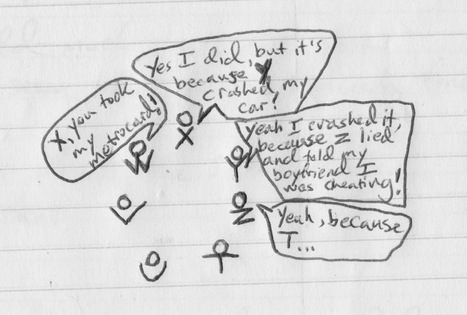 In "It Be Like That", a spect-actor tries to get into class.
Actors, from L to R: Andy, Mujahid, Devante, Spect-actor, Quatiek.


Doesn’t that happen in reality?

We played "Blame the Next" in several rehearsals. I realized the similarities to “Yes, But”, and its particular challenges in improvisation: each player needs to shape an accusation that makes passing the blame make sense. Both versions cause plenty of laughter. After we’d play, we’d discuss Does that happen? When do we see that?  Everyone recognized it. Actors talked about people shrugging off blame - it’s not my fault…yeah, but I have no choice...those are the rules…I can’t help you. That’s not so funny.

The Justice Community Plus actors taught the game to their audience the night they performed at the Staten Island NeON, including everyone in a giant circle of "Blame the Next". Then they performed It Be Like That. They showed young people getting shut out of class, stopped on the street, spending the day at truancy or the night at the precinct.

Characters asked “Can I come in to class? Can I go back to school? Can I get my call? Why are you doing this to me?” The replies they heard: <Shrug> “Sorry, but I don’t make the rules.” "Blame the Next" continued.

Many of the “arsenal of games” documented by Theatre of the Oppressed founder Augusto Boal ask participants to “de-mechanize” mentally and physically; to step outside of every-day thoughts and behaviors and observe them, understand them, question them. Demechanization expands our ability to identify problems and take concrete social action. After some games I will ask a group what happened in the play of it, to notice what was outside their typical behavior and what reflected reality. This discussion proves a challenge in itself, as people tend to start nailing down one Lesson from a game. But when powers of observation kick in, and people connect interactions in the game to interactions at work or relationships, and people start saying “I usually don’t ever _____” and start to wonder why, then the doors to our experiences open, and reality comes into rehearsal.

I thank the Justice Community Plus actors for seeing and hearing the measure of reality in “Yes, But” and creating a variation to reflect the “Blame the Next” mechanism. I deliver it to the arsenal to be played, discussed and rigorously investigated. 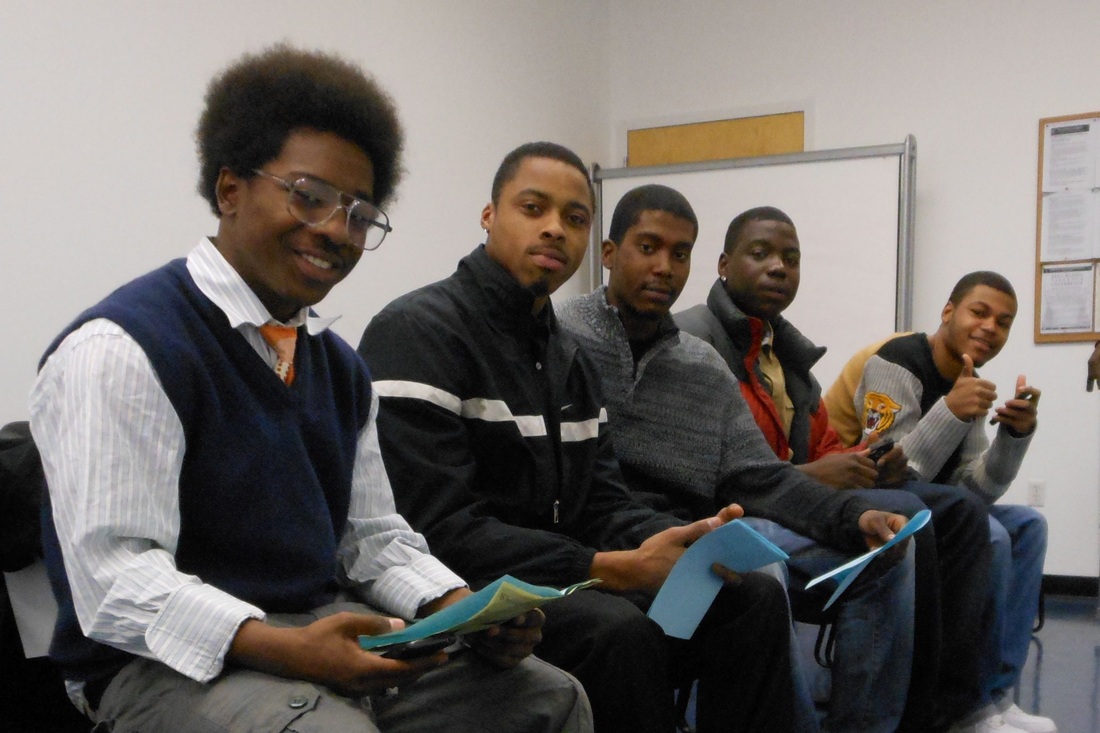 Congratulations to the graduates of Justice Community Plus! (L to R: Mujahid, Devante, Quatiek, Klon, Michael)
Gratitude to the staff - Romel, Jacklyn, Beth - and interns at the Staten Island Youth Justice Center!
This year’s Legislative Theater Festival will take place Thursday, May 29th – Saturday, May 31st  at the Church of St. Luke’s in the Fields. Contact Artistic Director Katy Rubin at [email protected] or 646-504-4582 to collaborate and participate.

Sophie Nimmannit has been a Joker with TONYC since 2011, and has created Forum plays with troupes at the Ali Forney Center, Hetrick-Martin Institute, and Justice Community Plus (at the Staten Island Youth Justice Center). Sophie is currently rehearsing with the Queens Justice Corps at CASES in preparation for the 2014 Legislative Theatre Festival, Can't Get Right.